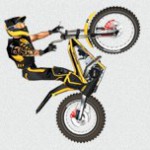 Seeing Motorbike on the App Store stirred a great sense of excitement for me considering I am a motorcyclist and a huge fan of Trials HD on the Xbox 360. Needless to say, this game is going to be compared by many to RedLynx’s masterpiece of arcade game heaven, which can be a blessing and a curse. After all, I don’t think Motorbike is aiming to be a competitor considering that they are on totally different platforms and with Motorbike’s current price tag, overall game size and scope cement that thought further. However there have always been motorcycle games around in the form of track racers, dirt racers and trials and the latter is a field which rarely captured my imagination until Trials HD. Thankfully due to the success of that perhaps some inspiration was drawn in creating this for the Mac which I am pleased to say, is a pleasure to play.

The game is not massive, but with a track editor and online feature too, then its size will be determined by its love of the public and their dedication to creating some great tracks. I have already played a few of the online tracks and the quality is already surprising. The game has a simple track editor which you can get to grips with very quickly and easily, so I had a go at manufacturing some courses and found myself creating some half decent set ups within only a hour or so. Therefore your own creativity and the imagination of others is where the lifeblood of this game lies. 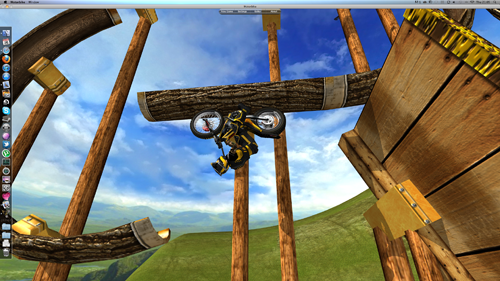 As a single player experience there are currently forty tracks to start with. You can play from track one right through to forty in a traditional ordered sense, but if you find yourself stuck on a particular part then you can skip and choose any level you want. There are colour selections of bikes and riders both male and female, as well as three themes for the courses. These are grassy hills with a dirt track, orange mountainous terrain not too dissimilar from the Grand Canyon, and a metal selection which turns the courses into roller coaster like frameworks. 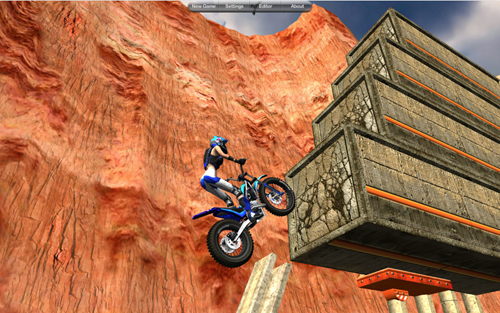 Graphically I found the grass theme the best and most pleasing to the eye of the available three. You can select various resolution sizes and five graphical levels so you can find the perfect mix of speed and graphics for your Mac’s capability. Having a 27″ iMac i5 with 8GB RAM needless to say I put the resolution on 2560 x 1440 and the highest graphical setting and the game ran at lightning speed with very few defects.

Being that this is a trials game I guess the most important part are the physics of it all. Thankfully they seem to work fairly well with barrels feeling weighty, wooden beams pivoting well depending on the location of your bike etc. It was very strange getting used to using the keys after being so familiar with two analogue sticks on my 360, but after a while it becomes second nature. You use the arrow keys of up to accelerate, down for reverse, space to break and left and right to shift your weight accordingly. The ‘R’ key will instantly send you back to the start to try again if you mess up, but if you are like me then you rarely get bored of seeing your rider fling through the air and fall to his bone crunching demise. This adds to a very playable experience with no loading times other than when you boot the game up. 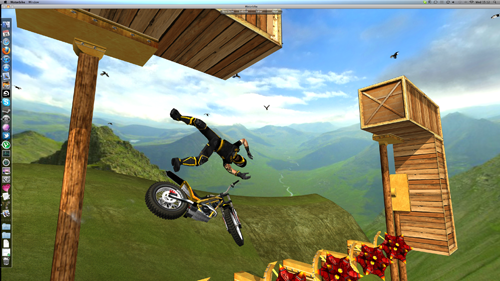 As for the negatives there are a couple. One of them is because of the way the camera operates (mostly side on) you have no idea where you are going on new levels which leaves you to keep making mistakes just so you can work out the path. On a couple of courses just finding your way through some levels proved a challenge in itself just wondering where to go, but then some of you will find that one of the best elements. In the earlier stages this is not an issue but later on be prepared to die many times to work out your path. Also, the weight sensitivity was a little high for my personal preference but perhaps that is simply because of a certain other xbox game becoming so much a part of my being that anything different will feel a little strange to me. That is not to say it is not manageable because it is and I am sure those of you who try this as your first trials game will find it just fine. The soundtrack leaves a little to be desired in that it plays the usual rock and metal background fare with nothing particularly standing out, so I found myself muting it after a while and just having the engine noises which are much nicer to listen to. 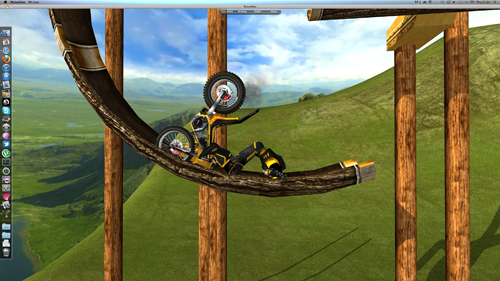 Final thoughts? As of todays date the game is on the Mac App Store at $9.99 or £5.99. The price point seems fair considering what you get and the level of polish it delivers and it is the perfect pick up and play game (or boot up and play game). It is nice to see games like this making their way to the Mac and this is a title which as mentioned previously, will have its longevity determined by other peoples (and your own) creativity once you are finished with the single player levels. Buy Motorbike – baKno Games here.