Yesterday at Computex, ECS showed off a device that can dock your iPhone 4, or a number of other smartphones, and display its contents on a 9.7-inch screen, while at the same time adding an SD-card slot, two USB ports, and a front facing camera. 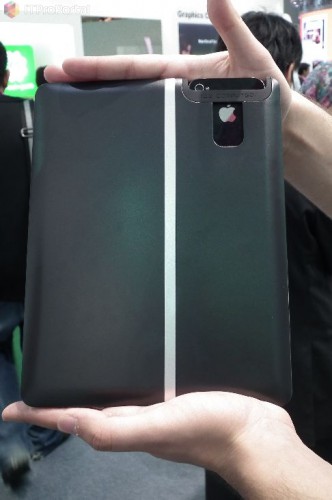 While this thing certainly seems interesting, I question its usefulness – it will be stuck to merely increasing the size of the existing iPhone interface and apps, and will entirely lack the rotation abilities of the iPad, as well as the ability to run apps designed for the larger interface, and with it being expected to run around $200, it won’t exactly be cheap either… still, if you need a boost to your geek cred, and have gobs of extra cash, go for it.

The ECS accessory is a cross-platform play of sorts due to its ability to work with and house multiple smartphone brands, from Apple’s iPhone to Windows Phone and Android smartphones. Best of all, the gizmo should work with future iOS devices – including iPhone 5 – using “simple upgrades”. The yet-unnamed device is the result of joint efforts by ECS and its partner ICE Computer. You can expect the accessory to hit the market in the fourth quarter costing $200 or less.