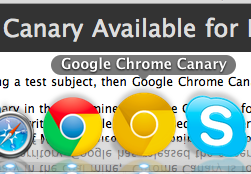 If you enjoy being on the cutting edge of browser technology and don’t mind being a test subject, then Google Chrome Canary is for you.

Just like the “canary in the coal mine,” Chrome Canary is for only the bravest browser users to explore uncharted territory. Google has released the experimental build of its popular Chrome browser (about 15% of MacTrast users are running Chrome) in order to test advanced features before releasing them on ‘regular’ Chrome. Chrome Canary is on version 13 while the stable version of Chrome is version 11.

I primarily use Safari and switch to Chrome only when I need to use Flash. I have been using John Gruber’s method of living without Flash and cheating with Google Chrome when Flash is needed, in order to preserve precious battery life on my MacBook Air. See his detailed instructions to essentially delete Flash from your system. Believe me, it works very well. I don’t even bother with Firefox because it loads too slowly.

If you’re one of the 13% of MacTrast users running Firefox, at least give Google Chrome a try. It’s snappy and a very good alternative to Safari. If you’re really brave and don’t mind a little instability in the name of advanced features, check out Google Chrome Canary.