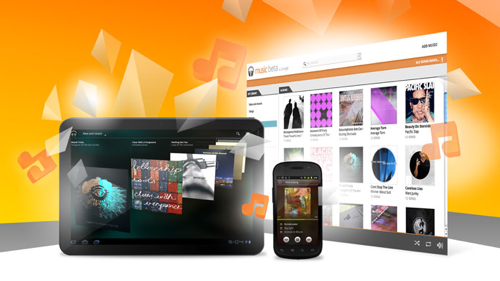 Google just announced Google Music at the I/O Conference today. For now the service is US and invite only and of course, as with all Google products, it’s in beta. Gmail was in beta for years, remember?

Paul Miller of This is my next… (will these guys get a real name already?) has details on the new cloud based music solution from Google:

There’s a web app, which pulls songs into the cloud from your iTunes library or anywhere else on your computer. You can create playlists and mixes, which can be accessed from your tablet and phone.

So far, so good. It sounds much easier than Amazon’s Cloud Player.

The Android app accesses all this cloud goodness, meaning “I’ll never have to use a cable to access my music again.” To enjoy your music offline, the player caches recently played songs, and it also allows you to manually “pin” music to make it available offline. The app will be available for Honeycomb, Gingerbread, and Froyo, with some UI differentiation for the latter two. Everything is tied to your Google account, so naturally if you get a new phone you’ll get access to your music library right away.

The service launches today at music.google.com but you will have to request an invitation and wait patiently to be invited. I’m sure it’s getting flooded right now. I signed in using my Gmail and two different Google Apps accounts to hedge my bets. If and when you get an invitation, the service will be free during the beta period and will allow you to upload up to 20,000 songs to your cloud locker. Devices running Android 2.2 and above will be able to run the music app player now to manage music already on the device. Once the service is activated, the Android player will then have access to everything on the Google Music account as well.

The silver lining for iOS users is the the seemingly simple iTunes export and the web app. Amazon and Google have it goin’ on, now it’s your turn Apple.

I’ll have a full review of Google Music as soon as one of my three requests is accepted.

via This is my next…