Intel’s next-gen Ivy Bridge Chips, predecessor to the Sandy Bridge chips currently in the newest Macs, have been delayed by Intel, moving from Late 2011 into 2012, meaning the next generation of awesome Mac devices will likely be delayed as well. 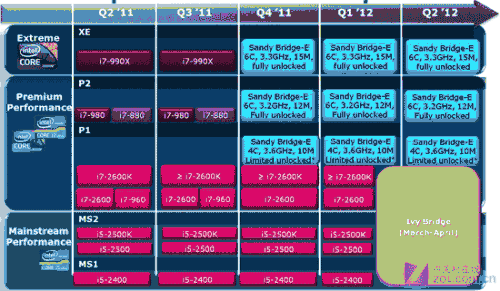 Several news outlets are pointed to a leaked Intel roadmap (pictured above) putting Ivy Bridge chips in the late Q1-Q2 2011 timeframe, and indicating a March or April 2012 release of the chips at the earliest. This means that you won’s be seeing Ivy Bridge iMacs and macBooks for at least ten months, and possibly longer.

This is, of course, a rumor based on an alleged leak, so take the info for what you will…