It’s a good day for Jailbreakers. The Infini Dev Team is working on an alternative jailbreak app store called Lima – but what’s really interesting about it is how it works – as a web app through Safari, not requiring a front-end like Cydia. 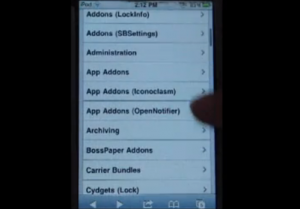 The entire thing is browser based, so simply firing up Safari and heading to the store’s URL is all that’s needed to browse, download, and install the apps you’d like to see. It’ll certainly change how people download and use contraband apps.

It’s still a work in progress, but its developers say it should be available soon.

According to MacStories, the Lima store will allow third parties to put their programs for sale. Users will have an option to manage repositories and use “a backup system for installed packages” so they won’t have to use third-party apps such as xBackup or PKGBackup to restore their apps after a firmware update, explains author Federico Viticci. With an estimated ten percent of iOS devices being jailbroken and up to a million and half users logging in to the Cydia Store each day, the jailbreak market is clearly striving. The reasons are many, chiefly Apple’s numerous app rejections and the fact that Apple forbids popular tweaks, such as interface themes and custom skins.

Check out the below YouTube vid to see it in action!