I’ve often thought that it would be great if my iPhone did more for me – unlocked my car, replaced my house keys, made me coffee in the morning, turn off all my lights when I left the house, etc. Now Solstice Multimedia is promising to make it happen, with the iPad as the brains of the operation.

This stuff may sound crazy and futuristic, but its getting more and more real every day, with more and more accessory manufacturers helping us to bridge the gap between analog and digital. The concerns, such as potential security issues, haven’t been fully addressed yet, but nevertheless, let’s face it, this world is becoming a more and more digital one by the day. 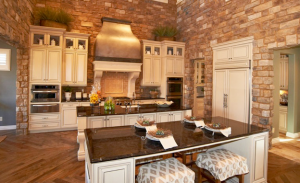 Talk to Solstice Multimedia about it, and you’ll get a very interesting answer. Solstice Media is a Denver-based company with a decade-long experience in telecommunications and residential services, and they want to turn your house into a full-featured iPad-controlled system. They even promote a 3,400-square- foot model home with two iPads built-in at $718,000.

Although the price of the model home is quite massive (Solstice is clearly targeting the wealthy with their idea at this point), the iOS-bases system that runs it will only cost you around $5,000. You can add optional video, audio, security, and other automation equipment to that setup, and if you do, you might end up spending upwards of $60,000 on the setup. That’s a heap of fancy equipment, and a lot of expense.

Apparently the system’s logic center is built into the home’s “mechanical room”, operating via a WiFi connection to 2 iPads, though a third device can be added to control everything without having to rely on a wall-mounted panel. Essentially, the iPad becomes the driving force, controlling various mechanical components that can control lights, blinds, cameras, and other awesome stuff.

A model home in the Overlook neighborhood in Lone Tree’s Heritage Hills is equipped with two built- in iPads that can control all of the electronic systems in the home, including lights, motorized shades, music and television systems, baby monitors and closed-circuit cameras.

“The iPad has brought the entry-level price point down significantly, because an 8-inch in-wall touch screen before cost upwards of $3,000 or more,” Deatherage said. “Now we can get a $500 iPad and still provide most of the functionality that an in-wall touch panel can give.

I dunno about you, but as appealing as a house like this sounds, sometimes I just like to handle things myself… Although I suppose I could give it a personality, call it Alfred, and pretend I was Bruce Wayne… or Bill Gates… Either way, awesome stuff.

Thoughts? Sound off in the comments! You can learn more by visiting Solstice Multimedia on the web.