Well, it didn’t take long after news of “Apple Store 2.0” came out that details began emerging from various sources. The heart of the new store layout is a new internal app used by the employees called RetailMe. 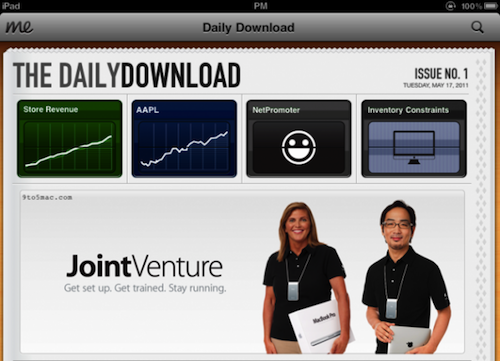 The app has tons in interesting new features, and is expected to be the tool on hand for every Apple Retail employee when the new Apple Store configuration goes live at some point on Sunday.

RetailMe is a fancy new application which features Apple’s internal newspaper called ‘The Daily Download’. It will take over the current web-based version of the newspaper and is said to be “incredibly stylish and functional,” and greater than it was before.

Along with RetailMe, internal iPads, which will be issues to each store as an in-house set, will be flashed with Apple Connect, Apple Directory, Concierge, Mobile Genius, iRepair, and (interesting enough) EasyPay – the system Apple currently uses to take your payments via iPod Touch. RetailMe is set to be the iPad application at the heart of the revamped Apple store, and is expected to take over the iPod touches currently issued to each employee.