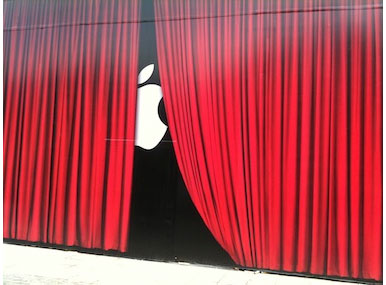 We reported earlier today that the iPhone 4S will not include NFC for mobile payment processing. Contrary to that, BGR is now reporting that the big 10th Anniversary Apple Store celebration on Thursday will include the launch of NFC payment terminals in the stores.

As supporting evidence for this new rumor, BGR is reporting that Apple’s current iPod touch payment devices “recently all went offline for “maintenance” for an entire day.” They were also informed by a source:

that there were recently multiple “overnights” in Apple retail locations, which required store employees to “assist in installing TBD devices” throughout the stores “as the retail segment of Apple grows.” Lastly, sources tell us that there have been new tables installed in stores that have different wiring compared to Apple’s standard tables. They also have cash wraps built in, but they aren’t being used yet and employees have been instructed to wait for further information.

This sounds pretty promising for an NFC point-of-sale system in Apple retail stores if the source is credible. Apple would certainly want to put the chicken before the egg so everyone has at least one store where they can make a purchase with their NFC-enabled iPhone 4S.

Follow all of the latest iPhone 5/4S rumors here.