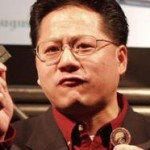 Nvidia’s outspoken CEO, Jen-Hsun Huang, believes that Android tablets could catch up with and outsell the iPad in 3 years time. Huang was speaking at the Reuters Technology Summit in New York where he made the bold claim.

Huang is basing this expectation on the fact that Android phones outsold the iPhone within 3 years of its release.

“The Android phone took only two and a half years to achieve the momentum that we’re talking about. I would expect the same thing on Honeycomb tablets.”

In March, Apple announced that it had sold 15 million iPads to date. Apple expected to sell between 7 and 8 million iPad 2s in the second quarter of 2011, however, they are now expecting to ship between 10 and 10.5 million units.

Apple, who hold approximately 90% of the tablet market, has set itself a target of selling between 35 and 40 million units in 2011.

If Android were to outsell the iPad in 3 years they would probably need to sell close to 150 million units in the next three years.

Huang told CNET blogger Brooke Crothers that One of the things holding Android back is their lack of presence in retail units. “It’s a point of sales problem. It’s an expertise at retail problem. It’s a marketing problem to consumers. It is a price point problem.”

Huang is right about one thing. Android need to up their retail efforts if they are ever to catch up with Apple, but outsell the iPad in three years? I will sooner eat my hat!