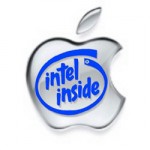 SemiAccurate is reporting that Apple may be dumping Intel processors in favor of ARM processors. The UK based ARM, is apparently poised to take ownership of the processors in Apple’s range of Macbooks. But it won’t happen until 2013, if it happens at all.

The short story is that Apple is moving the laptop line, and presumably desktops too, to ARM based chips as soon as possible. With A15/Eagle allowing more than 32-bit memory access, things look up, but it seems silly to do so before the full 64 bit cores come in the following generation. Nvidia is directly telling certain favored analysts that they will have Denver out in Q4 of 2012, maybe Q1/2013, and that uses the full on 64-bit ARM instruction set. It won’t be out by then, but that gives you a good estimation of when that ISA will break cover from one vendor or other. Think mid-2013.

It was only 5 years ago that Apple switched from PowerPC to Intel Processors.

You can read more about the change in processor here.