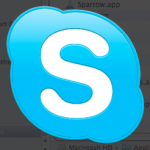 In one of his recent blog posts, Robert X. Cringely talks about why Microsoft bought Skype. And along with the conclusion that Microsoft did it to keep Google from doing it, he also shares his thoughts about Apple’s role in the fight.

Apple isn’t the next Microsoft, you see.
Apple is not the next anything because the role it aspires to transcends anything imaginable by Microsoft, ever. Google is the next Microsoft, so Google is seen by Ballmer as the immediate threat — the one he has a hope in hell of actually doing something about.
In the end Apple will probably beat both Google and Microsoft, but that’s not a story for today.

Further on in the post Cringely makes his point clear that Microsoft bought Skype in something that could look like a desperate move. They needed something new to milk. And if Google would have bought Skype – they would have immediately converted all of the 663 million Skype subskriptions to Google Voice and Gmail and make Yahoo and MSN even more irrelevant. A very interesting point, and this leaves Apple out of the fight for a second – it looks like Microsoft is seeing Google as their biggest enemy at the moment, rather than Apple.

But to once again quote Cringely:

This is not an end-game, not yet.