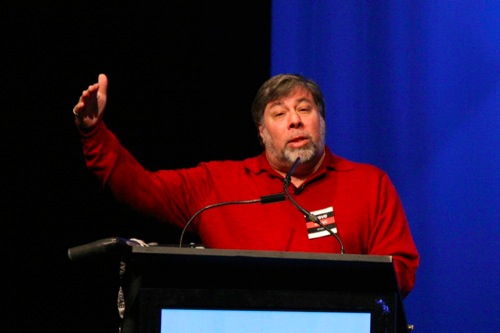 Speaking at the Embedded Systems Conference in San Jose, California, Woz denounced Paul Allen’s lawsuit against Apple, Google, Facebook and a boatload of other tech-related companies.

Paul Allen should be out there investing in companies that are doing something, making products, actually making a new future for the world, and not ‘I’m … going to sue people, and get in bed with the lawyers to make my money.’ That’s not the right way.

So-called “patent-trolling” stifles innovation, especially since wealthier companies tend to prevent the innovation of startups by filing and buying up patents and then sitting on them. As Woz said, “any fifth-grader could come up with the same approach.”

Woz had intended to go see Allen speak at the Computer History Museum recently but changed his mind since “he’s suing all these companies like Apple and Google – but he’s not suing Microsoft – because he bought all these patents.”

Startups often do not stand a chance against large corporations waiting to squash a new idea, since they often lack the legal and financial resources to file a patent. The double-edged sword of the current patent system is broken and needs to be reformed.