Gaming certainly isn’t short of First Person Shooters, far from it. These days it takes a lot for a game to stand out amongst the heaps of competition, however UberStrike is different from most conventional FPSs, its neglected a single player campaign and focused entirely on an immersive multiplayer experience.

The game comes in at $9.99 which, for the price, is incredible.  UberStrike has all the features of a typical First Person Shooter: guns, sound effects and well designed maps. Its multiplayer is very similar to games like Team Fortress 2; there are two teams which battle each other. The game runs on a point system, when the opponents points reach 0 the game is over and the opposing team wins. 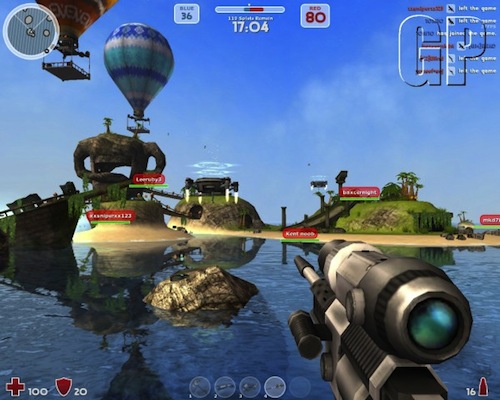 Graphically, the game has had a lot of work put into it. It certainly wouldn’t look out of place amongst big, chart-breaking shooters. Its beautiful landscapes and simple character designs makes it stand out from other shooters on the Mac App Store. The landscapes really catch the players eye. The water flows beautifully, the mountains look fantastic and the caves appear to go on forever. However, some of the textures such as sand, look a little bit ‘cartoony’ and unrealistic. This is only a minor setback though and does not detract from the rest of the incredible graphic design.

You can tell that a lot of work has gone into the character customisation as well. There are hundreds of different clothes, hats and accessories for you to choose from to make your character stand out amongst the thousands of other online players. The customisation is very easy to control as well, it has a simplistic layout making it easy for the player to choose exactly what they want and can I say, it looks absolutely brilliant. 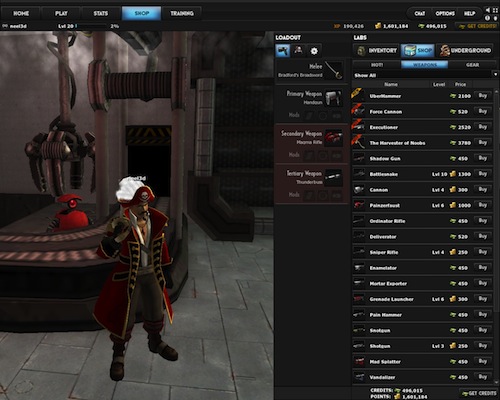 Sound-wise the game does not have a lot to offer. There isn’t much music or dialogue, only sound effects. However, a shooter game would be nothing without a set of powerful, accurate sound effects. There’s a range of sound effects that add to the games atmosphere such as gunshots, footsteps which are very useful for finding your enemies and strange ambient sounds for the teleporters.

The most important aspect of any game is, not surprisingly, the gameplay.  There are two main modes in UberStrike; Training Mode and Deathmatch. Training mode is for players who are new to first person shooters. It gives them a small map with no other players on. There are a few bots which remain stationary in training mode this is perfect for running a bit of target practise or get to grips with the controls.

Deathmatch is a completely different experience, it’s a much more energetic game mode than training mode, it’s fast paced, flowing and completely emmersive. You work as two teams, a red and a blue team. Each team battles to kill the other team which earns them points. When the points have reached the maximum, the game is over.

During Deathmatch you have the option to pick up weapons, power-ups and medkits. These get scattered around the map and are fantastic for when you need a little bit more energy for a kill.

Overall Uberstrike is a well thought out game that creates an energetic atmosphere amongst players. Thousands of people log in every day to get their ‘Uber-fix’. This isn’t surprising because once you start playing, you literally cannot stop. It’s a fantastic, polished game for an incredible price. You’d be a fool to say no.

You can download UberStrike from the Mac App Store for $9.99.