It looks like everyone is now caving to Apple’s content rules to avoid being kicked off the App Store – first Google (who’s Google Books app was removed and then re-added after complying), and now Amazon. The message is clear: Those that wish to play ball with Apple will do it by Apple’s own rules, no matter how big the players are. 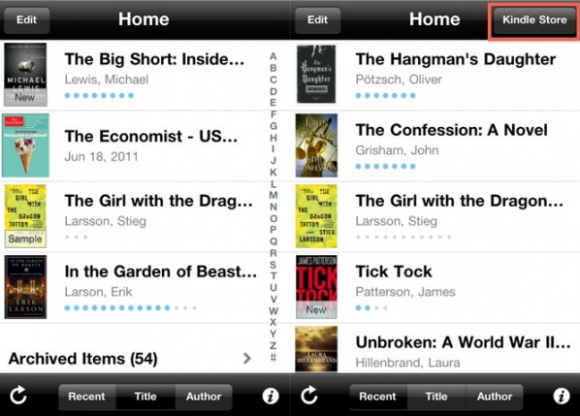 Amazon has just released an update to their Kindle for iOS app (App Store Link), which now no longer features a link to the Kindle store. See the above screenshot for the difference. Despite being a big player, it appears that nobody, not even Amazon, or Google, can do battle with Apple on their own soil. Even the Wall Street Journal has now caved in to Apple’s policy of no external linking.

Barnes and Noble’s Nook for iOS app (App Store Link) has committed the same changes as well. The changes are in response to an App Store policy of Apple’s which requires all purchases made from an iOS app to go through the App Store’s purchasing program, which results in Apple getting a nice 30% cut of all content.

There are some other updates for the Kindle App, which you can see in the release notes below: