Apparently it doesn’t matter who you are – everyone makes mistakes, even Apple! And this one’s a doozy! Apple reportedly charged John Christman’s PayPal account 122 separate times for his Lion download, for a total of $3878.40! 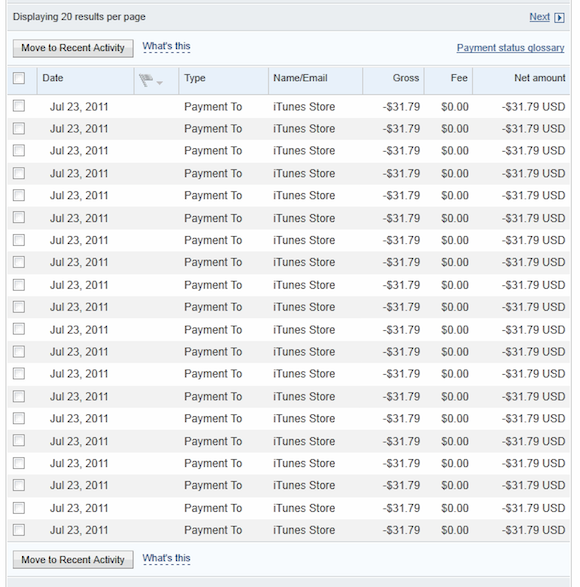 While its obvious that Christman probably didn’t intentionally purchase Lion 12 times, it’s unclear exactly what has gone wrong. Christman reported the incident to both PayPal and Apple, both of whom blame the other, and while both companies claim to be investigating the issue, Mr. Christman is almost $4000 in the hole until they get it sorted out.

Christman has stated that he believes the issue is related to one of Apple’s new iCloud features that lets iTunes automatically download prior purchases, and claims that the times on his account for each of the 121 extra purchases correspond to his downloading of prior purchased apps from the App Store using the latest iTunes 10.5 beta.

While I personally doubt that what Christman believes happened is actually the case (The iTunes App Store and the Mac App Store are not linked in this manner), its clear that something went wrong – and apparently Christman isn’t the only person who was charged to many times for Lion, as there’s a lengthy discussion on Apple support website surrounding the issue.

Further, even though the purchases in the screenshot above say “refunded”, Christman claims he hasn’t yet received any of the money back, as Apple claims there was only a single transaction, and when PayPal was informed, they merely closed his case and marked the items as refunded on the 23rd. Christman even claims he wont be able to pay his mortgage payment due to the loss of his funds.

While it’s unclear exactly what happened in Mr. Christman’s case, it’s certainly Apple responsibility to make things right for him – especially considering that Apple could have simply refunded his PayPal payments without question when they heard about his incident, but failed to do so, choosing to first investigate the matter instead.