While camping out in front of an Apple Store prior to a new Apple product release is nothing new, this man’s antics border on ridiculous – Apparently 29-year-old Rob Shoesmith has already lined up to get an iPhone 5, despite the fact that a release date hasn’t yet been set. 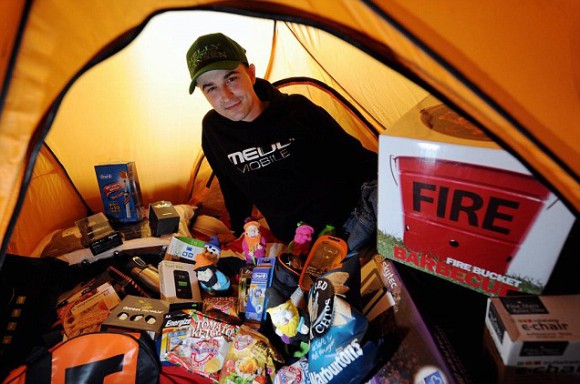 In truth, it appears he really has an ulterior motive – marketing. Shoesmith has already received over a $40,000 value in freebies, usage of vehicles, and marketing bids from various companies looking to capitalize on his publicity.

Shoesmith is camping out in front of a London, UK Apple Store. His day job is in public relations, and the stunt is apparently closely tied to his job. According to Shoesmith, the stunt is a marketing and PR experiment, and one which seems to be getting some intriguing results.

In exchange for covering products and advertising on his blog, Shoesmith has already earned mass amounts of free food, gadgets, gear, and even usage of a newe 20,000 Chevrolet car. He plans to donate anything left after the stunt to charity.

Do you think he’ll make it until the actual iPhone 5 release?