Some new photos have popped up of some possible iPad 3 components, along with a report that the parts, if authentic, could indicate that the next iPad could see an updated physical design.

The report comes to us from Apple.pro, who have a respectable track record of producing accurate hardware leaks. Their latest leak shows a component with a code number of 821, and the part number is shown as 1259, where the same component in the iPad 2 has a model number of 1180. 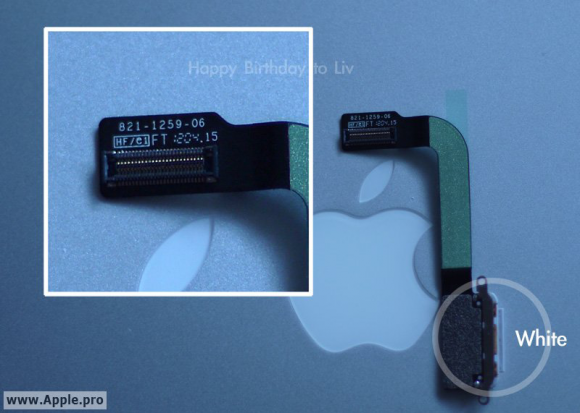 This information led the author to speculate that the so-called “iPad 3” (or perhaps an upcoming iPad 2 HD?) is a different model with a new design in comparison with the current iPad 2.

The leaked part shows an outward-facing connector, white in color, from which the author of the piece concluded that the new model will be offered in both black and white.

I’m not sure where I stand on this rumor – my gut reaction is that a photograph of a leaked component doesn’t mean much – the connector might not even be for an iPad, or any Apple product at all.

Even if it actually is a component for an iPad, there’s no good information on which to base the assumption that the product it might be in is even a finished product (it could be a prototype). But even if you grant that point, there is still no solid reason to make the leap that such a device would be released this year.

In short, I’d keep this rumor at arm’s length if I were you – even if it ends up being right, it’d be foolish to jump to conclusions this early in the game. And frankly, isn’t it a bit early for the iPad 3 rumors? Seriously.