I love discovering new ways to use my iPhone & iPad, so naturally I was thrilled to learn about the iHelicopter ($59.95, Free Shipping) – a fun, inexpensive R.C. helicopter that you can control with your iPhone.

The iHelicopter takes some getting used to before it really becomes entertaining, but once you’ve got your bearings, it’s a simple and fun device that can bring hours of enjoyment.

The iHelicopter is a fairly simple device, using a headphone jack dongle and a free App Store app to transform your iPhone, iPod touch or iPad into a remote control (though admittedly it’s not as nice on the iPad). 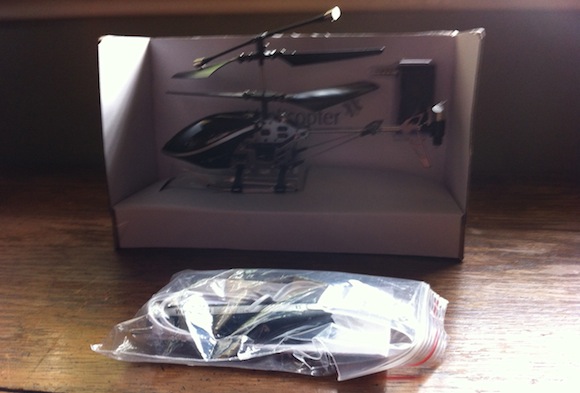 While the iHelicopter is not without its faults, for its affordable $60 asking price, I consider it to be a decent value and a good source of entertainment. I also appreciated that the manufacturer was thoughtful enough to include a few extra blades for both the main rotor and the tail rotor.

The packaging isn’t much to speak of, just thin white cardboard & tape, and it takes a bit of effort to safely remove the chopper and its accessories from the package, but the chopper itself is solidly built, as is the included remote dongle. The on-off switch on the iHelicopter was also far more durable than I expected, able to withstand repetitive switching at some length without weakening or giving way. 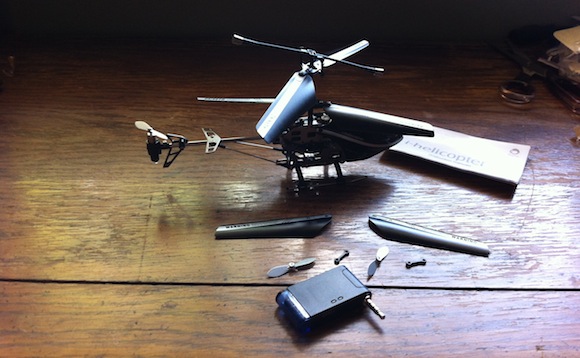 My first thought when I had the iHelicopter out of its package was that it seemed to be very well built – the structural portions of the chopper are all made of durable metal, and the blades are sturdy enough to do their job without any trouble.

The design of the various aspects of the iHelicopter, from its construction to its charging mechanism, and even the remote control and iOS app reflects a surprisingly level of thoughtfulness, especially for such an inexpensive device.

The blades, for instance, are made of a softer and less durable material than the frame of the chopper so that they’ll do little to no damage if they run into something they shouldn’t. The manufacturer was thoughtful enough to include some spare blades in the package in the event that you end up damaging the ones that come attached to the chopper (it’s not a matter of if so much as a matter of when. 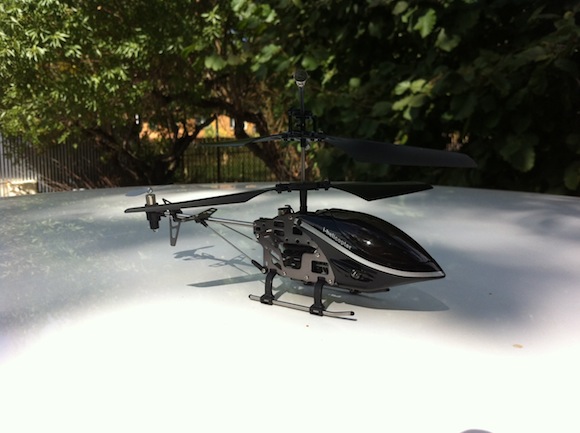 The charging mechanism is also interesting. The iHelicopter charges through any USB port, but the cable features a built-in red LED light that tells you when the chopper is fully charged.

The chopper also includes important safety features, such as flashing lights that continually blink when the chopper is in flight, both allowing you to keep an eye on the chopper, as well as warning others of its location.

The i-helicopter app, which is a free download from the App Store (Link), places all the controls you need to handle the iHelicopter on your device’s screen. The app initially asks you to identify (using pictures) which chopper you are using, then identifies your device and is able to communicate with it.

Once you’ve plugged the remote dongle into your device, simply set your device to the correct channel (A, B, or C), which is the only channel that causes your chopper to respond, and you’re ready to fly.

The app can be used either via manual controls, where you use the touchscreen to adjust the controls by touch, or (and I personally think this option is more fun) you can set the app to use your iPhone’s built in accelerometer and gyroscope to control the chopper, so that the chopper automatically flies in any direction you tilt your device. 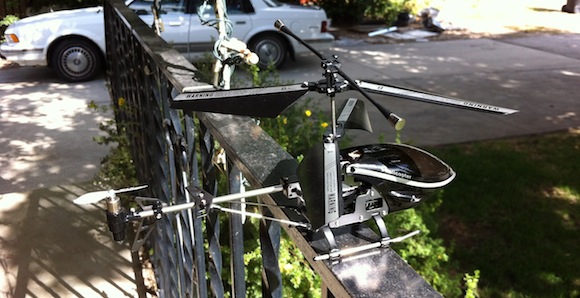 The interplay between the app, the remote dongle, and the iHelicopter is smooth and problem-free, and doesn’t bog the user down with any tricks or complications. In just works, which is a beautiful thing, especially among lower-priced gadgets.

The iHelicopter completely charges via USB in about 40 minutes, and can run for 8-10 minutes at a time, slowly lowering itself to the ground when the battery runs low. While I felt that 8-10 minutes was rather short, I also realized that anything more would require a larger battery, and likely a larger price tag.

The iHelicopter was surprisingly responsive when flying, and can actually be controlled with a fair degree of precision once you get used to the controls. Maneuvering the chopper into tight spaces is still a difficult task, but if you leave yourself a bit of a margin for turning and shifting the chopper, it’s easy to navigate around corners, avoid walls, and so forth. 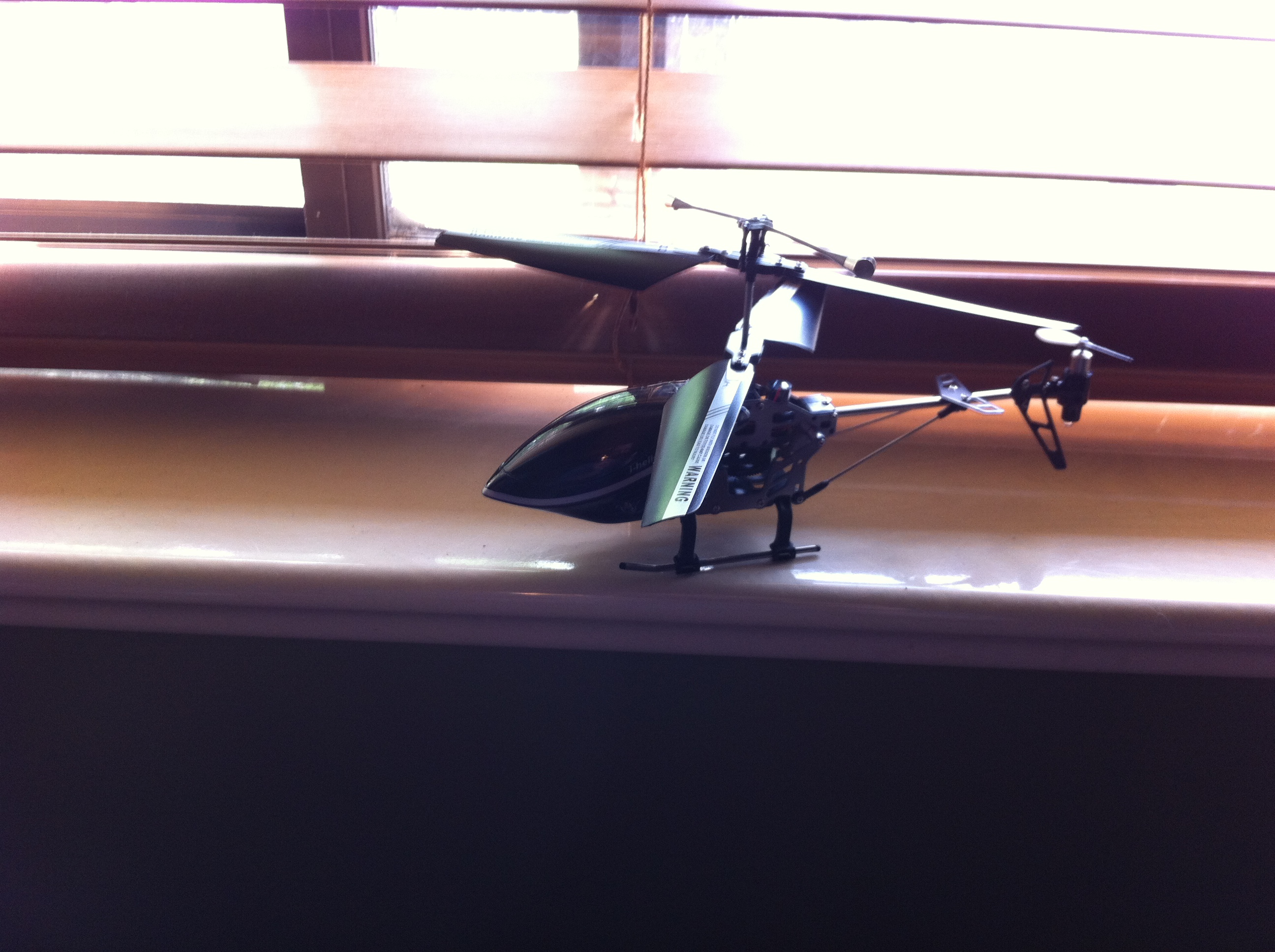 One thing that I found a tad disappointing is that the iHelicopter doesn’t have a very large range. When operating the plane indoors, the plane was able to operate when it was within 20-25 feet of the remote, which I found acceptable. When using the chopper outdoors, however, that range decreased to at most 10-15 feet, requiring you to be fairly close to the chopper while it’s flying.

Another thing that I found somewhat troublesome is that receiving a text or a phone call while the iHelicopter was airborne caused the chopper to abruptly stop and plummet to the earth, whereas I would have expected the chopper to slowly lower itself to the ground after losing contact with the remote.

While the iHelicopter certainly isn’t perfect, with the free-falling when it loses contact with the remote being its most concerning fault, it is largely a fun, inexpensive device that, despite taking a while to get used to, is simple to use, and a unique way to entertain yourself. 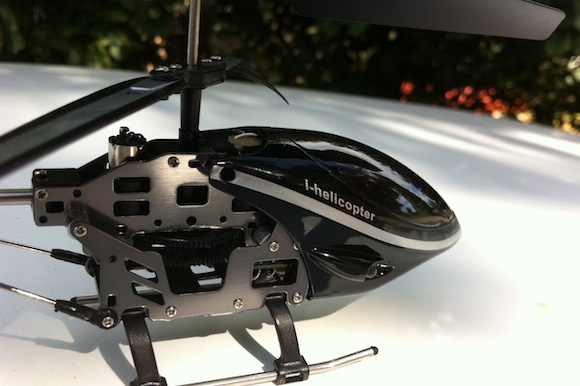 For the $60 asking price (including free shipping anywhere in the world), the iHelicopter met and even exceeded my expectations, and even though I found myself troubled by its flaws from time to time, I overall found the iHelicopter to be a thoroughly satisfying device, and a decent value for the money.

Considering the iHelicopter’s price, overall acceptable performance, quality and usability, whilst weighing out the cons I encountered while using the device, I award the iHelicopter a 4 out of 5. While the iHelicopter isn’t in the same league as something like the AR.Drone, it is nevertheless a fun and worthwhile product that I can confortably recommend to anyone who has a few spare bucks and is willing to take the time to adapt to the experience of flying a remote control chopper. 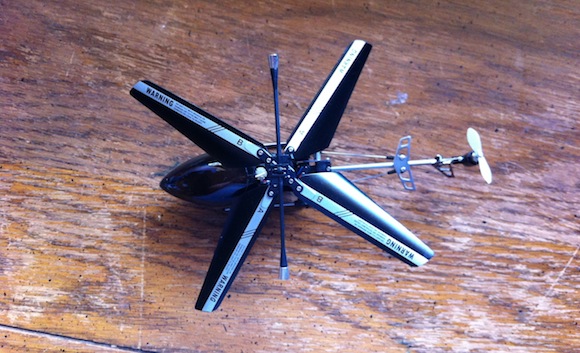 To summarize, here are a few of the pros and cons I encountered in my experience with the iHelicopter.

For more information, or to purchase any of the 4 available models of the iHelicopter ($59.95, link), visit the iHelicopter product page on the web. For those of you wanting to see the iHelicopter in action, iSpazio has put together a video demonstration, embedded below.