With the overwhelming popularity of Apple’s products, it’s not wonder that its stores are getting crowded, so much so that they’ve had to think of way for Genius bars to accommodate more customers, ifoAppleStore reports. The solution lies in turning the bar 90 degrees, so that it is perpendicular to the wall, getting rid of the children’s seats in the process. 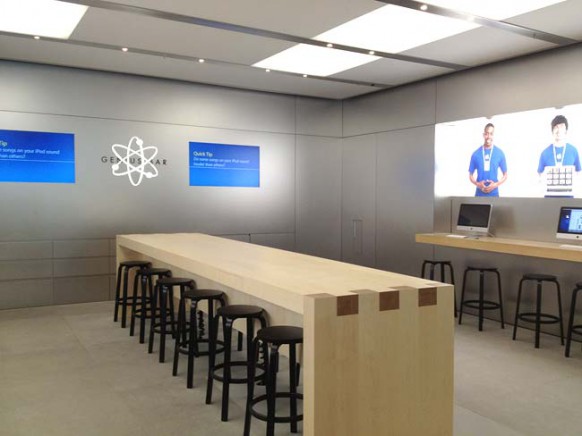 The table is set about 15 inches out from the rear wall of the store to allow employees to move from one side to another. There is at least one currency drawer in the table shown in the photo, but there are no visible outlets on the top surface for network, electrical or other connections. Electric and other cables are visible below the table, connecting to plugs set in the floor. Drawers are visible in the rear wall for Genius Bar equipment and supplies. Apple is in the midst of enlarging or moving several early stores to increase their size to improve the ability to accommodate more visitors. However, not every shopping mall or other venue has space available for a larger Apple store. This new 90-degree Genius Bar turn solution would be particularly effective at narrow stores where there is limited room for seated customers. The improvement seems to come at the expense of the very popular kids area, with its round, black seats and iPads loaded with children’s software.

The change, as mentioned, would sacrifice the kids section with iPads loaded with games and other apps for children.While it might decrease the appeal of the Apple Store to kids, it will definitely allow more adults in, and after all, they’re the people who do the paying, so it’s a sound move from a business perspective.

It is unknown how many stores will adopt this change, but if it has a successful start, you’d imagine that we could see it rolled out all over the world.