As Apple and Google continue to grapple with each other over domination of the mobile, comScore’s latest research provides some very compelling insight into how the race is going. Interesting, this time around, comScore has found that Android’s growth is slowing down significantly, while iOS continues to gain share at twice Android’s rate. 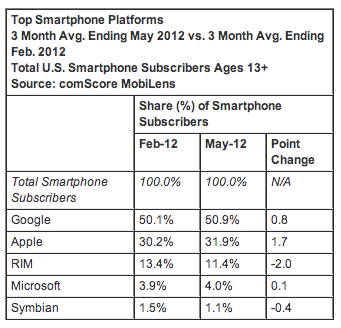 The research notes that Android currently dominates the mobile market with a 50.9% share of the market, compared to 31.9% for iOS – but while Android only saw gains of 0.9% over the past three months, iOS grew by a significantly larger 1.7%. This follows a previous report suggesting that Android’s  growth rate may be leveling off.

What’s especially interesting about the data is that, while Apple did not release any new iOS devices last quarter, several new Android devices hit the scene, making Apple’s increase in growth much more significant by comparison.

Is Android losing its forward momentum while Apple catches up from behind? It’s difficult to draw such conclusions given only 3 months of data as a basis – but it certainly seems that way! You can check out the full report over at comScore.