Apple continues to be the dominant consumer in the global electronics supply scene. It’s expected to lengthen its lead as the largest buyer of chips, and is projected to spend $28 billion in 2012. 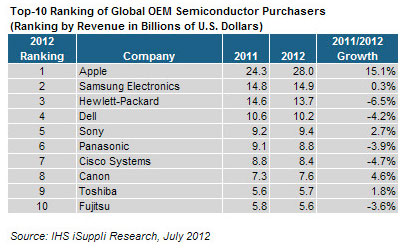 The latest data from IHS iSuppli forecasts that Apple’s chip expenses will increase by 15.1 percent in 2012, up from the $24.3 billion the company spent in 2011. That will widen Apple’s lead over Samsung, which is expected to spend $14.9 billion on semiconductors this year, up just 0.3 percent from 2011.

Half of the top 10 companies in the forecast are expected to decrease their spending on semiconductors this year. HP, Dell, Panasonic, Cisco, and Fujitsu are the companies decreasing their spending.

Apple maintains its lead in semiconductor purchasing, as the company continues to see strong demand for its products. It maintains “beneficial relationships” (sweetheart deals), with more than 150 suppliers.

“It’s well known that Apple has already conquered the smartphone and tablet segments—but behind the scenes the company is engaging in another kind of conquest: the dominance of the electronics supply chain,” said Myson Robles-Bruce, senior analyst for semiconductor spending and design activity at IHS. “Such a dominant position provides critical benefits, allowing one to dictate semiconductor pricing, control product roadmaps and obtain guaranteed supply and delivery. For Apple, these benefits translate into competitive advantages, letting it offer more advanced products at lower prices, faster and more reliably than the competition.”

Apple’s growth in chip expenses in 2012, (projected to be 15.1 percent), is over 3 times greater than the next best increase by Canon, which is expected to see a 4.6 percent increase this year.