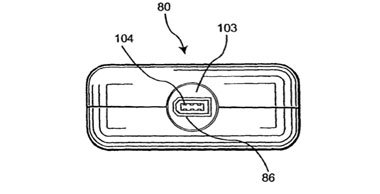 According to an image accompanying the patent, it appears superficially more similar to the original Firewire 400 connection, the port is rectangular in shape with a triangular edge to ensure that the connection is made the right way. Although it should be noted that Apple patent images rarely match the actual style of the end design.

The new patent, No. 8222773 describes a power port that also transfers data. It has been rumored recently that Apple will be introducing a new type of port on the iPhone 5.

While Apple files for numerous patents that never see the production line, rumors about the company dropping the traditional 30-pin connector have been flying around for a while now.