Apple has grabbed an increasingly larger share of mobile devices being tracked by Net Applications, reaching a whopping 65 percent in June. The 65.27 percent share was up from 62.65 percent in May. 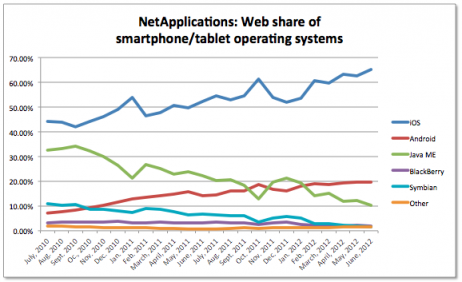 Apple’s next closest competitor in mobile browsing market is Google’s Android platform, which took 19.73 percent in the month of June. Android has also seen its share grow since last August, when it took 15.98 percent of mobile browsers.

The wins for iOS and Android have been at the expense of Research in Motion’s BlackBerry, and Nokia’s Symbian platforms. BlackBerry fell from 3.33 percent in August of 2011 to 1.87 percent in June, while Symbian saw its share drop from 6.21 percent last August to 1.40 percent in June.

Net Applications, which monitors hits on its 40,000 client sites and weighs the results based on population statistics, also tracks Apple’s Mac OS X share at 6.7 percent of computers browsing the internet, while Windows is an uber dominant 92.2 percent of computers tracked. Linux accounts for 1.1 percent.

Among browser software tracked, Safari had 4.7 percent of the market, lagging well behind Chrome at 19.1 percent, Firefox with 20.1 percent, and Internet Explorer at 54 percent.

StatCounter,  which is based in Dublin, monitors more websites — 3 million as of June, but does not weigh the results. In its latest report, the two mobile operating systems were neck and neck at just over 24% each.