Hotels want to offer guests cutting edge technology, but they want it to be something they’ll understand and use. A boutique hotel in Vancouver has come up with what they think is a valid plan. They’re replacing the “normal” hotel room phone with an iPhone. 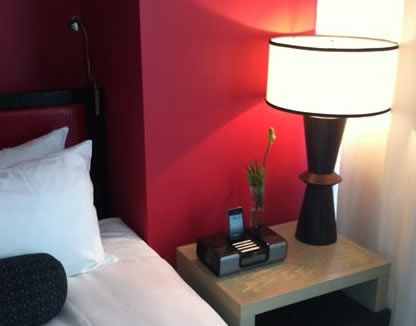 The Opus hotel in Vancouver’s trendy Yaletown neighborhood is in the process of making the switch to iPhones, figuring that guests — especially those from the USA — will know how to use them and appreciate having a Canadian phone to eliminate international roaming fees on their personal phones.

As guest of the Opus venture out into the city, they are given the freedom to take their room’s iPhone with them. The phones allow them to stay connected to the Internet, and make and receive phone calls.

The phone also keeps them connected to the hotel. Each phone is set up with one-touch contacts for each department in the hotel. Local calls are complimentary.

Upon checkout, the iPhone is automatically wiped clean by an app to ensure privacy and security.

“Technology is a way of life today, not just a perk, and that holds true even while traveling,” says Nicholas Gandossi, Opus Vancouver’s general manager.

Earlier this year, the hotel became the first in Canada to offer an iPad 2 in every room. It comes with an “iPad Virtual Concierge” installed.