As Research In Motion’s customers prepare for its impending demise, RIM’s new CEO vowed on Tuesday to turn the troubled company around with a new generation of BlackBerry devices, saying he would transform RIM into a “lean, mean, hunting machine.” 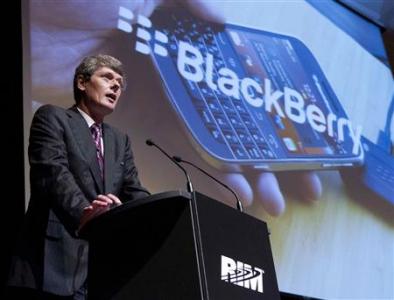 But Thorsten Heins, presiding over his first annual meeting since taking the helm, offered little to disgruntled shareholders beyond his faith in the power of the BlackBerry 10 line to reverse RIM’s fortunes. Its battered stock fell another 5 percent after he spoke.

Following a year that saw nearly 80 percent of RIM’s value wiped out, Heins acknowledged shareholders frustration. Grumbling has been heard about his decision to delay the launch of the new phones until after the crucial holiday shopping season.

“I am not satisfied with the performance of the company over the past year,” Heins told the mostly subdued audience. “Many of you are frustrated with the time it has taken us to make our way through the transition.”

Heins, who took over as CEO in January, expressed his confidence that RIM was headed in the right direction. “I have assembled a leadership team for RIM that’s truly capable of taking us into future.”

RIM was a mobile email pioneer with its first BlackBerry devices more than a decade ago, but has seen market share slide drastically as consumers have flocked to Apple’s iPhone and devices based on Google’s Android operating system.