One genre that seems to be a hit or miss on iOS are role playing games. Some RPGs seem to try to take different positive elements from other games and combine them to make it work really well, or just clone something and change the characters and story, for instance.

I don’t think any developer has perfected it, unless you’re playing a Final Fantasy port. INT Square has come close to delivering something different and noteworthy with their new action RPG, Combo Slash (Free, App Store Link). 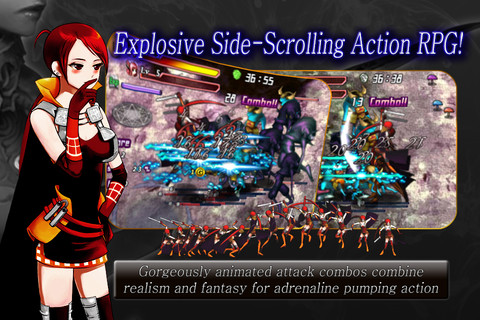 The game puts you in the main character’s shoes, Kelly, a heroine, who has to protect the princess as well as young girls from the army of darkness in the world of Calun Continent. The story may sound pretty general, but being that Combo Slash is an action RPG, there is a good amount of dialog to keep the story moving along. One good thing about Combo Slash that’s different from other RPGs is that there is plenty of brawling on the action side of the game.

There are over 150 items and combos you can use at your disposal. As you progress through the game, you’ll get more combos and items. Combo Slash also has a good fighting system. The brawling aspect of the game is one of the more in-depth overall. Throughout the beginning of the game, you can easily button mash, which works pretty well. Of course since the hordes of enemies get stronger and there are a larger amount of them at a time, you have to do some stargazing throughout the game.

As you progress, it gets more intense and this is where the spells and the ability to level up come in. Even though Combo Slash is a side-scrolling game, one interesting thing is that the maps are randomized every time you play the game or if you have to start over. Since the maps are randomized, to guide you along the way is a crystal detector instead of having the same layout the whole way through, which makes the game a lot more fun and challenging. 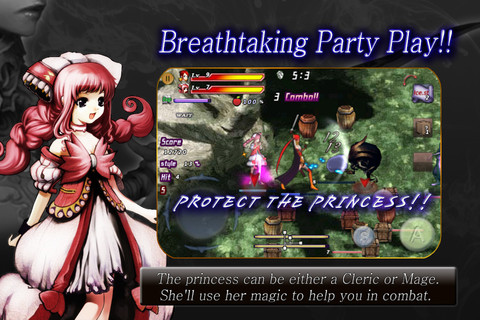 INT Square haa designed the control scheme well to incorporate two key aspects of Combo Clash; the brawling and the RPG element such as commanding spells. While brawling and fighting off enemies, you can move around the map with the joystick and use the three buttons against enemies while defending the princess. The “A” button is the action button, which you can use to do a wide variety of combos. The “S” button can be used to do a backflip as a secondary action and the “B’ button is used for blocking. The spells you summon can be accessed by just touching the top right of the screen. 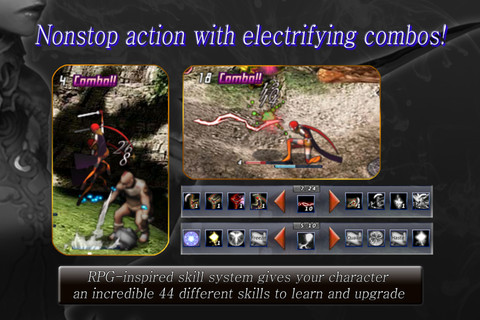 The graphics in Combo Slash leave something to be desired. I didn’t expect them to be phenomenal or breathtaking. The graphics in some ways remind me of many older overhead or side-scrolling RPGs in the sense that it’s nothing that sets the bar, but focuses more on gameplay. It’s more of what everyone is familiar with and used to seeing, especially on iOS.

As far as all the gameplay that’s going on, sometimes it’s hard to tell where Kelly (the main character) and the princess are. They both seem to get lost in the tremendous amount of hordes of enemies that swarm the whole map. It’s just something that can be overwhelming, especially if you’re a more casual fan of action RPGs. Retina display support would also have come in handy in Combo Slash, since it has this style of gameplay and presentation. 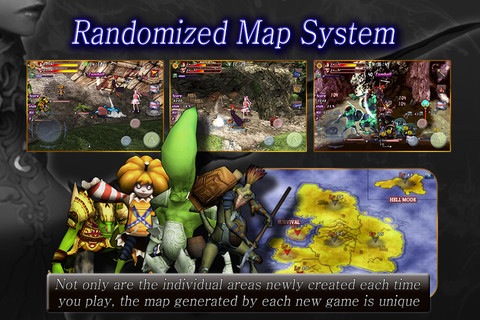 Combo Slash is a great action RPG with a great balance of brawling, spells, and items at your disposal. As far as the role-playing aspect of the games goes, there are plenty of skills systems and upgrades throughout the game. The storyline is also solid and gives a good idea of the characters without being too general. A few other things that were noticeable were the sound effects and music.

While the sound effects are just fine, the background music doesn’t loop during game play, so if the music stops playing, all you hear are the sound effects and it can sound out of place at times. Overall, Combo Slash is a great side-scrolling brawler with plenty of RPG elements and overtones. If you’re hard-pressed to find a solid action RPG for iOS, try out INT Square’s latest offering. 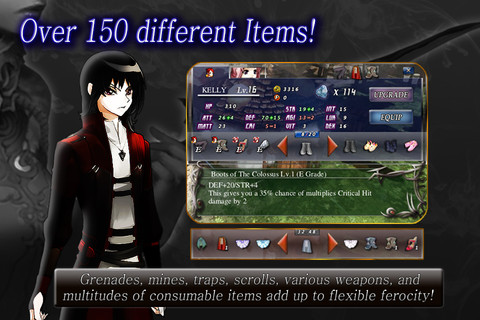