In two years iPad usage has changed quite a bit. When first released in 2010, the device was used mostly for web browsing, email, apps, games, and reading. According to research by Consumer Intelligence Research Partners (CIRP), the users of the third-generation iPad are more likely to use their device for work. 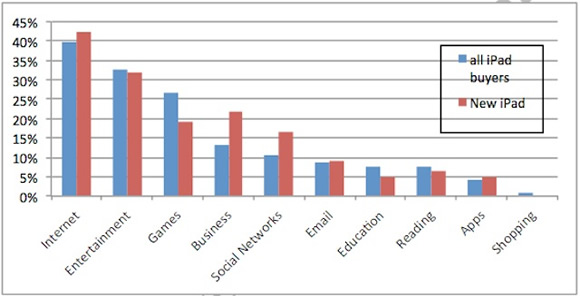 In the four months since the new iPad went on sale, usage has increased across most categories that CIRP tracks: using the iPad for social networking, web browsing, and apps, but no category of usage saw a bigger bump than business.

CIRP surveyed more than 1,000 consumers who bought iPads from December 2011 through to April 2012.

The increase in business usage shouldn’t be a big surprise to observers, as the iPad hardware has evolved into a much more business friendly device across it’s three generations. With faster processors, Retina Display, 4G connectivity, and business friendly iOS apps being released almost every day, the iPad has become a very attractive option for business oriented users.