Following last night’s posting of a next-gen iPhone “engineering sample” (case mold), Gotta Be Mobile has now posted new photos of a physical model of the rumored iPad Mini, reflecting the shape and relative form factor of the device, as well as the rumored smaller dock connector Apple may begin using for their devices.

The site notes that the model seems to be a case mold. Case designs have proven largely accurate in the past – although last year, many case makers jumped the gun, and mistakenly began producing cases for a redesigned next-gen iPhone that instead turned out to be the iPhone 4S.

The report also comments on the likely size of the next-gen iPad, based on the mold:

The iPad Mini will be a little bit thinner than the current iPad, but it is only about two-thirds the size. […]

These measurements would also mean that the “iPad Mini” will be significantly wider than other similarly sized tablets, such as the Nexus 7, granting it a fair bit more screen real estate than its competitors. The below image compares the mold against the current iPad: 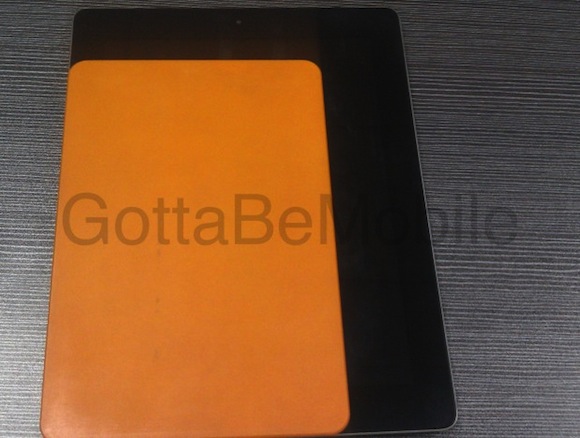 Again, as with the next-gen iPhone “engineering sample,” the authenticity of this can’t be verified – but if Apple is indeed planning a smaller iPad, the clues provided by this case mold do seem likely, and at the very least, provide some interesting food for thought.