The chairman of the Federal Communications Commission, Julius Genachowski, has sent a letter to the Federal Aviation Administration Thursday, urging the agency to allow greater use of electronics on airplanes. 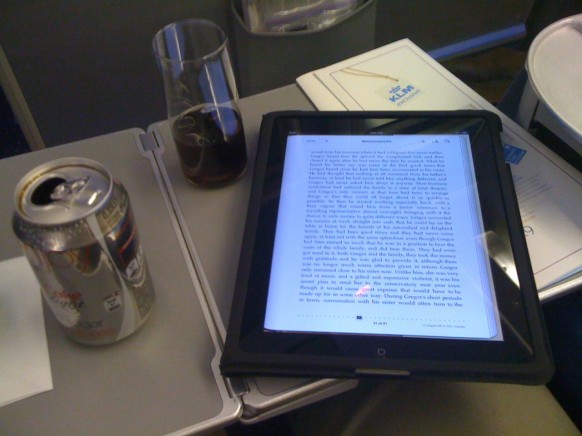 Mr. Genachowski said the F.A.A. should “enable greater use of tablets, e-readers, and other portable devices” during flights. The letter was first obtained by The Hill.

The letter, which was addressed to Michael Huerta, the acting administrator of the F.A.A., went on to promote the importance of allowing people to use these devices on planes as more Americans become increasingly reliant on devices for work and pleasure.

Mr. Genachowski went on to write that such devices “empower people to stay informed and connected with friends and family” and enable businesses to be more productive, “helping drive economic growth and boost U.S. competitiveness.”

The F.A.A. has not responded to a request from the Times for comment.

Although no proof has been confirmed that electronic devices such as the Apple iPad interfere with airplane avionics, the F.A.A. has maintained strict rules about use of such devices during takeoffs and landings.

Amid pressure from the public and media outlets, the F.A.A. has said it will initiate a review of its policies about electronic devices in all phases of flight. There has been no word on the progress of the review process.

The last time any such testing was done was back in 2006, long before iPads and other similar devices existed. During the study, the F.A.A. found that “there was no evidence saying these devices can’t interfere with a plane, and there was no evidence saying that they can.” Erroring on the side of safety, the administration chose to enforce strict rules about such devices on planes during takeoffs and landings.

Earlier this year, the F.A.A. approved the use of iPads instead of paper flight manuals in the cockpit for pilots.