The Marion Police Department in Virginia is encouraging its residents to help take a bite out of crime via a new iOS app. The department is joining several across the United States that already use localized versions of the app. 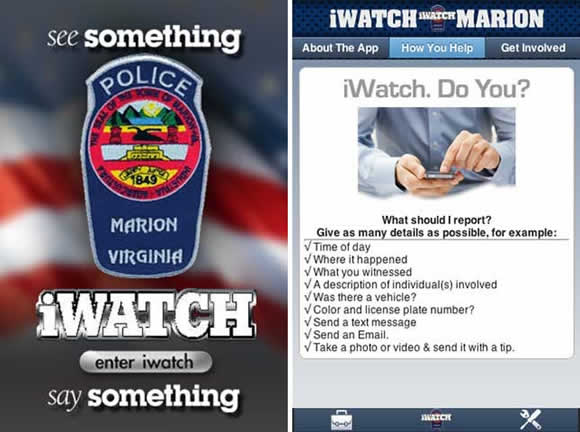 The app, called iWatchMarion, was released on Nov. 30 by iThinQware in collaboration with the Marion Police Department as a free download intended to streamline crime reporting and notification for the town’s residents.

The app developers say iWatch is intended to raise awareness for crime prevention efforts and help bolster a strong relationship between the community and law enforcement personnel.

Using the app, citizens and visitors to the town can upload text tips, emails, photos and videos of any suspicious activity as it occurs. The alerts also include location tags from the iPhone’s GPS, which will allow authorities to dispatch units to the scene of the activity quickly and efficiently.

Marion, a town approximately 100 miles southwest of Roanoke, VA, is the latest town to be added to the iWatch lineup. 18 such crime reporting apps have been developed for other municipalities, including big cities such as Philadelphia and Dallas.