If you’ve got a jailbroken iPhone, and used hacked apps, you lost a lifeline on Sunday. A prominent service that supplied stolen iOS apps for jailbroken devices has closed. It’s seen by most as a major victory on the war on piracy. 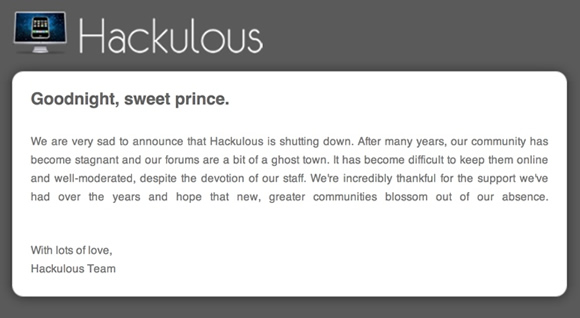 The “Hackulous” website was updated with a statement on Sunday revealing that the service was gone for good. The letter revealed that the community for stolen applications had become “stagnant,” and its forums were a “ghost town.”

“It has become difficult to keep them online and well-moderated, despite the devotion of our staff,” said the Hackulous team. “We’re incredibly thankful for the support we’ve had over the years and hope that new, greater communities blossom out of our absence.”

The Hackulous app could be installed on a jailbroken iOS device, and then used in connection with another service called Apptrackr, which supplied cracked apps via a web interface.

Apptrackr also abruptly shut down, citing a lack of activity. However, the timing of the closings was viewed as suspicious by TorrentFreak, who spoke with two people familiar with operation of the two who said they were “surprised” at the closings.

“The sites were apparently healthy and still had plenty of users,” author ‘enigmax’ wrote. “Indeed, the shutdown statement appears to carry a contradiction — ‘ghost town’ forums are by their very nature not particularly difficult to keep ‘well-moderated’ since nobody uses them.”

Another potential reason for the shutdown could be related to rumors that a jailbreak for iOS 6 is not on the horizon.

Apple has toiled for years in a constant back and forth between the company and the iOS jailbreaking community, constantly looking to plug holes and exploits used by hackers.

While this can be seen as a temporary victory in the war on piracy, certainly other tools will arise to fill the void.

Jailbreaking per se is not illegal, but can be used to perform illegal activities such as stealing applications through such venues as Hackulous.