More iPhone buyers are opting for the latest model, the iPhone 5, than they have in previous years. It seems customers are willing to shell out more to be able to have the best device available. 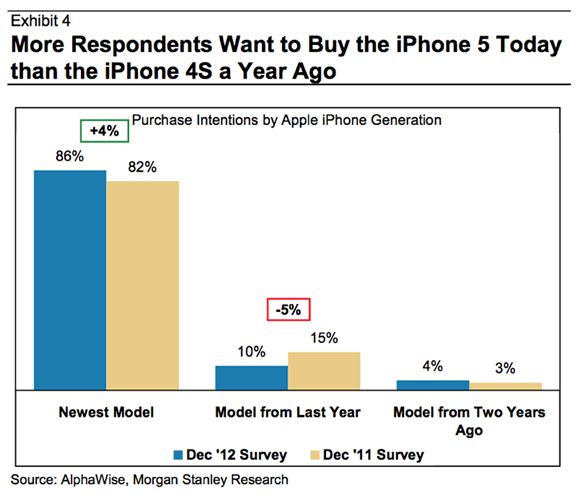 A new survey of more than 1,000 U.S. smartphone buyers by Morgan Stanley and AlphaWise found that 86 percent of respondents planning to buy an iPhone said they would choose the iPhone 5, which starts at $199 with a two-year service contract. In comparison, the same poll a year ago found that 82 percent said they would purchase the iPhone 4S, which at the time was Apple’s latest model sold at that same price.

The December 2012 survey showed the 10% of customers planning to buy an iPhone said they would go with the iPhone 4S, which at that time sold for $99 with a new two-year commitment, while 4% said they would opt for the free with contract iPhone 4.

A similar survey one year ago showed 15% would choose the iPhone 4, then selling for $99, with 3% going for the iPhone 3GS, which was the “freebie” phone during that point in time.

Analyst Katy Huberty theorizes that the improvement in customers opting for the latest and greatest iPhone is likely due to the fact this years “5” is a major upgrade, with a redesigned exterior, larger screen, and LTE connectivity. Last years top model, the 4S, looked almost identical to it’s predecessor, the iPhone 4.

The survey, performed by Morgan Stanley and AlphaWise, also found that Apple leads the smartphone industry in customer retention. Among those surveyed, 83% of iPhone users said they plan to buy another iPhone. That’s a 10% bump from a year ago. 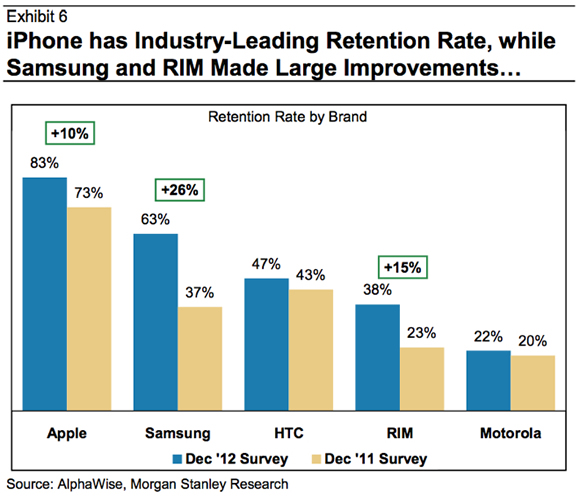 Samsung also showed a growth in retention rate among its users, coming in with a 63% count for users who would be buying another Samsung handset, a significant bump for the Korean handset maker, jumping 26 points form the 37% rate one year ago. Surprisingly, RIM made a nice jump in retention rates among its users, up 15 points from 23% a year ago.

The poll also found that 64% of U.S. iPhone buyers had previously owned another iPhone, up 23 points from the previous 41% reading in 2011.