Nielsen has released its Q2 2012 Cross-Platform Report, and it shows that “second-screen” television viewing has become quite popular with smartphone and tablet users, with smartphones in more than 50 percent of U.S. homes and tablets in almost 20 percent. 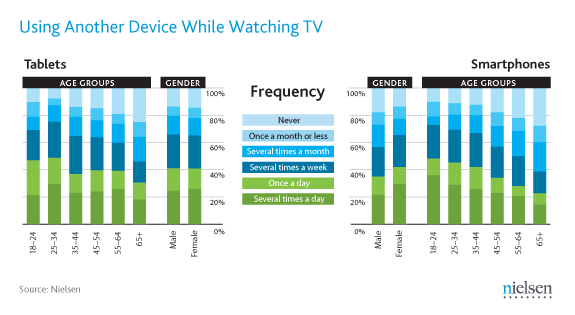 The data shows that 85 percent of mobile owners use their tablet or smartphone while watching television at least once a month, while 40 percent do so on a daily basis. 41 percent of those who use a second screen daily are using a tablet, while 39 percent are using a smartphone.

The dreaded “age gap,” where older users are slow to adapt new technology, doesn’t seem to exist with tablets. Thirty-six percent of those age 35–54 years old and 44 percent of people 55–64 years old use their tablets while watching TV in order to go more in-depth into whatever they’re watching. Almost a third of tablet users age 25–64 check sports scores while watching a game.

While tablet users tend to check programming info and sports scores, the smartphone users tend to use them to do social networking, shop, and access their email.