There’s a lot of ways to explore the world and all it has to offer. If you prefer to do it from the comfort of your Mac, you have plenty of options. Of course there’s Google Earth, as well as a wide variety of other apps. Very few if any allow you to view earth in a number of ways, whether it’s as a screensaver, applying it as wallpaper, or interactively. Earth 3D ($2.99, App Store Link) by 3Planesoft offers you the ability to navigate the globe in any three ways with over 200 world sights in HD-quality.

For the most part, Earth 3D is a pretty basic application that makes for a neat wallpaper or screensaver. Of course, if you set the app to screensaver or wallpaper mode, the map will rotate by itself in any random direction. You also have the option to turn or off background music, sound effects,  and adjust the volume of it to your preference. I had the music turned on at a very low setting when I had it set to wallpaper. 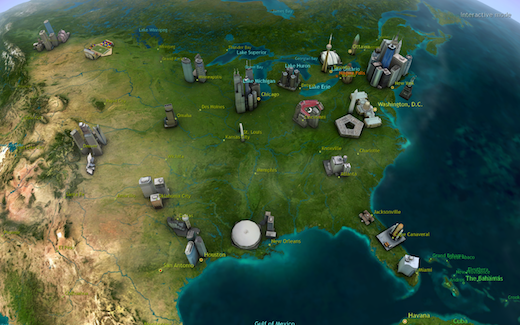 As you would imagine, if you’re watching a video or listening to music, the music from Earth 3D would interfere. In this case, I kept having to go back and forth to the Preferences window and adjusting it accordingly. It would have been more convenient if you were able to choose that option right from the menu bar. A lot of other Mac applications have this ability, so I’m sure it would be something that the developers would be able to add in a future update. 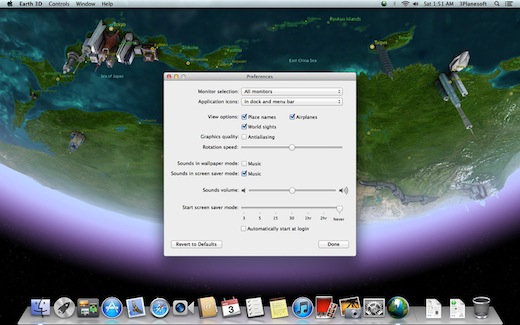 Also under the Preferences window is an option for multi-monitor support with monitor selection. The application looks beautiful running across two screens, especially if you have the resolution maxed out. Earth 3D supports retina displays, but besides that you can explore the planet with HD-textures for 1920×1080 and up.

The planet and all the world sights look so detailed thanks to the high-quality effects and 3D graphics. There are 253 world sights in all plus 838 geographic names. The application was just updated with new world sights and geographic names, but there are a lot still missing. These cities that are missing aren’t that big as the others already in there, but it’s still somewhat noticeable. 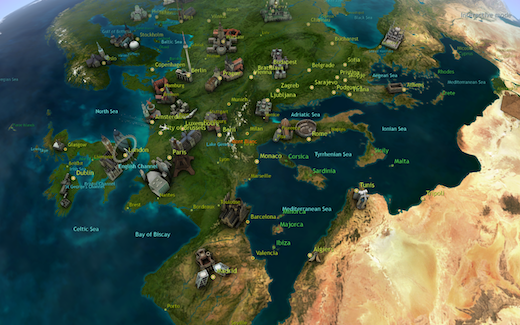 One part of the app which I was most looking forward to was Interactive mode just because I though I would have been able to do a lot more interacting and exploring. You can only view Interactive mode in full screen, which is not a big deal, but it would have been essential to view the app in a separate window if you’re multitasking. Other than that, the controls in Interactive mode are pretty basic. You can move in any direction with the directional buttons and turn around with the mouse. I was expecting to be able to zoom in on the planet to get a closer look at the world sights and maybe click on a certain sight to get more information about it. 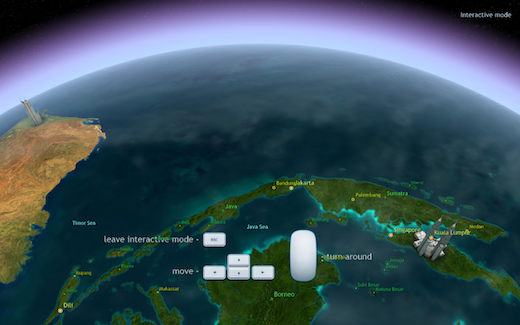 Earth 3D has a few cool features such as wallpaper and screensaver mode, but for the price, I was expecting a bit more. The graphics look great and vibrant. There’s a lot of detail and highly vibrant textures. The developers put a lot of effort into the graphics, probably more than any other aspect of Earth 3D. Besides the different modes, there are some small details added such as planes flying by across the planet, sound effects, and an original music track.

One of the things I was skeptical about was if the battery would drain more if the app was running in wallpaper mode in the background. I noticed it was draining a little quicker. For someone who works on their Mac most of the day such as myself, I would rarely use the wallpaper or even the screensaver feature if at all. Overall, Earth 3D is a pretty interesting application, but not something I would wind up spending too much time using. 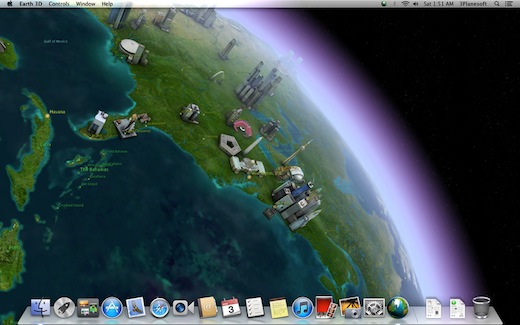