Social games are all the rage, and social games using word puzzles is one of the most popular. Listen Up! lite by AppSLAW, LLC, takes the word puzzle genre, and mixes it up a bit. You have to guess the one-word answer by listening to the audio clue your opponent sends you. 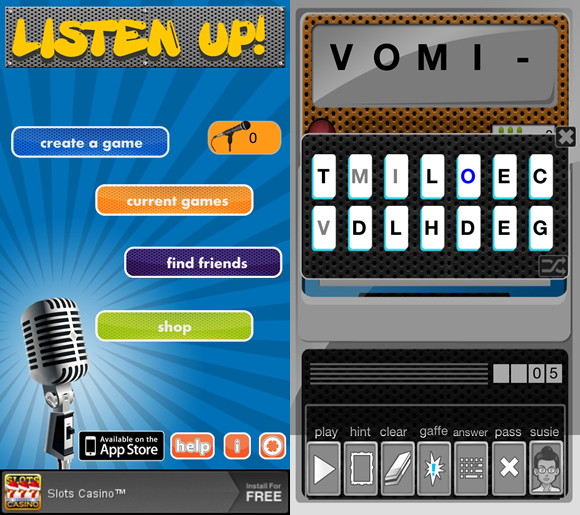 You can start a game by inviting a Facebook friend, (the game can use your Facebook login, or you can setup a login using your email address), finding a random opponent, or you can invite a player via email. Once you’ve found an opponent, pick one of three words shown on the screen, they range from Easy, to Medium, to Hard. Then, take your best shot at recording a 5 second audio clip to best describe that word.

The idea is to not say the word, because well, that kind of makes guessing too easy, doesn’t it? Otherwise, it’s freestyling all the way, make a noise or noises that you think will help the other player guess the word you’ve chosen. Then, the sound gets sent to the other player, and they listen to your audio clue and attempt to guess the word. From experience, usually players will do a good job of supplying a clue, but other times, you will find yourself looking at your iPhone like a dog watching a card trick while you’re trying to figure out what sound they’re trying to imitate.

If you guess right, you’ll collect “mics.” The harder the word you guess, the more mics you’ll win. 1 for Easy, 2 for Medium, and 3 for Hard. You can then use the mics to later unlock clues when trying to guess in later rounds. The game is a blast if you have an uninhibited playing partner, and you’re both willing to go all out. You’ll definitely laugh out loud multiple times if you’re both willing to go for it.

I do think it would be more fun if the game had an in-game chat feature, as my playing partner and I had to communicate about the game via text messages. No big deal, but in-game communication would be handy.

The game allows you to record your clues, review them, and then re-record them if desired. Nice feature. You can also replay incoming clues as needed, and you can “buy” hints by using the mics you’ve earned. If for some reason you just can’t get the answer, you can “Pass,” and concede defeat.

The game also includes a “Susie Soundmaster” option that lets players nominate sound bites they particularly admire or enjoy. The game is supported by advertising, but it doesn’t really get in the way. 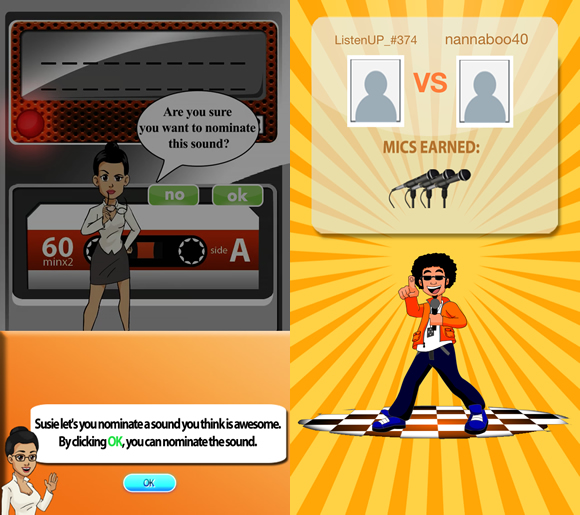 The game is a nice twist on the turn-based word games we’ve all seen. The audio clues make it fun and enjoyable to attempt to guess the word. A few times I played back the audio clue just to laugh at them once again.

If you like word games, I’d say give Listen Up! lite a try.