The Modern Combat series continues to make strides in an effort to be one of the best first person shooters on iOS. Since every title that has released, Gameloft has added new features and mechanics to Modern Combat. This year the developers have played it more on the safe side and have stayed tried and true to what made Modern Combat such a hit.

As far as Modern Combat 4: Zero Hour ($6.99, App Store Link) is concerned, the single player is more or less the same with a few unique in-game additions. Where Zero Hour shines are the great graphics and the best multiplayer experience with a first person shooter on iOS. 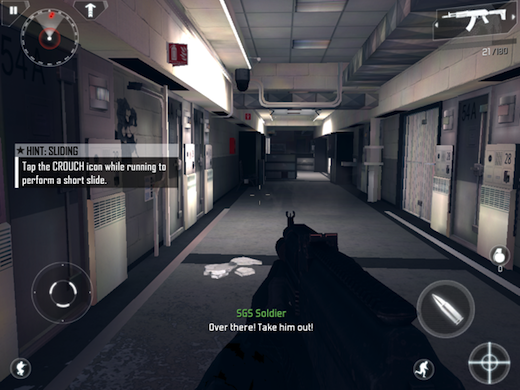 In Modern Combat 4: Zero Hour, you have to fight against a terrorist group who has taken world leaders hostage in the wake of a nuclear disaster. In the campaign you play as a few different protagonists plus from a different point of view, the campaign takes a turn as you play as an antagonist, terrorist Edward Page. It’s a pretty cut and dry story as far as the campaign goes.

If you’re familiar with previous Call of Duty or Battlefield games, you know what to expect in Zero Hour as the stories are pretty similar. The campaign has 13 missions in all and takes about four hours to complete. Considering it’s an iOS game, it’s more on the longer side, but of course depending on which difficulty you choose, it might take a bit longer to complete. Some of the missions are easier than others. I found myself breezing through one unscathed then having to go through the next one a few times until I completed it. 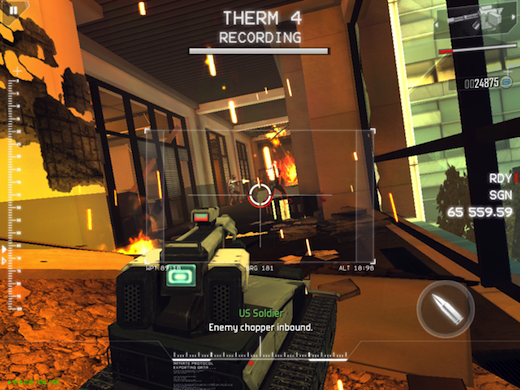 If you played the previous Modern Combat offering from Gameloft, in Fallen Nation you’ll notice a lot of similarities between the two. Besides the four different difficulty types and the familiar controls, the short cutscenes between levels and missions are just enough to bring the story together and introduce all the characters. I did notice in Zero Hour that most of it seemed pretty general.

I didn’t feel like I was really tuned into the story too much, but the levels and missions were really entertaining because you don’t get to experience that quality of gameplay in a first person shooter on iOS. There are some instances within the campaign where you may reach the end of a mission and it then takes a while for the next one to load with no indication of a loading screen. The transitions from mission to mission just seem out of place in a fast-pace game. 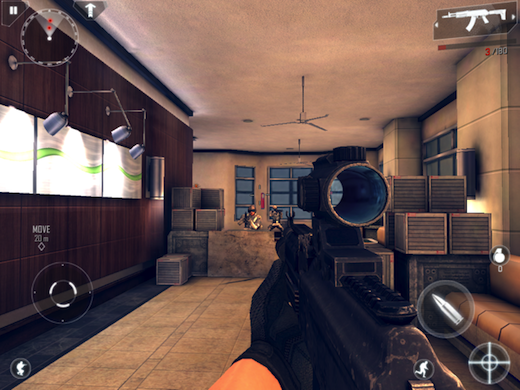 Like Fallen Nation before it, Zero Hour has an immensely captivating multiplayer mode. There are a number of ranked match types including Battle, Team battle, capture the flag, manhunt, and more. There are also a good number of maps to choose from and a large amount of weapons at your disposal. To be able to play in multiplayer mode, you need to create an account with Gameloft Live. Signing up only takes a minute or two.

You can also create and search custom matches. There wasn’t any serious lag in the gameplay, but I did get disconnected a few times. Up to 12 players can battle it out across 8 different maps. An advancement system within multiplayer mode rewards for kills, which eventually help you level up. One new addition to multiplayer is the improvement to stat tracking. Players can check their detailed individual stats throughout their playing history in multiplayer mode. 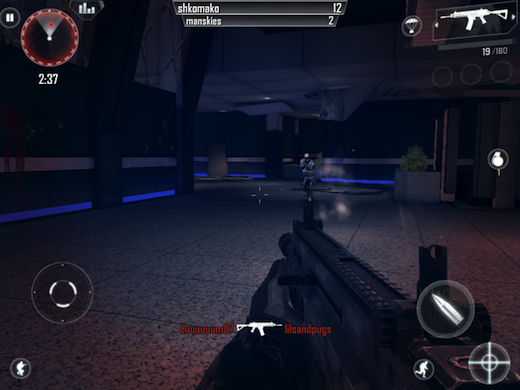 A big improvement of Modern Combat comes in terms of the controls. Through the options menu in the customize hud, you can alter the controls and put them just about anywhere on the screen. The default controls work just fine for the most part. There were a few times where I would miss the fire or aim button just because they’re so close to the run and grenade button. I was pressing the ‘grenade’ button often when I meant to press the ‘fire’ button.

I don’t think it’s only because all the buttons are so close together, but just starting the campaign, of course you have to get used to the controls. Besides setting any button anywhere on screen you can make them bigger or smaller. Another small addition to the control scheme is the gyroscope, which you use for aiming and controlling the camera. You can always turn it off. I prefer using touch controls because most of the time you get more accurate feedback. 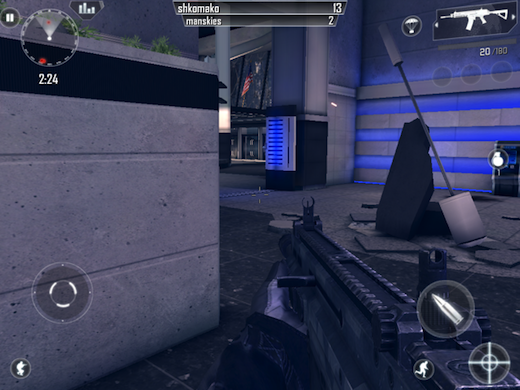 Modern Combat 4: Zero Hour is another solid hit in the FPS franchise. There are a few areas of the game that keep it back from being an upgrade to previous games in the franchise such as the unoriginal story, weak AI, and repetitive dialog. There are some great improvements in the graphics. Even though retina displays aren’t fully supported, the maps look great as always. Zero Hour is the first Gameloft title to use the Havok Engine, which give the game a lot of realism and improved animation.

Zero Hour also contains improved sound and voice acting, which show off during the cutscenes, but during gameplay, it’s not too noticeable. Zero Hour is really strong in multiplayer mode. This is where most of the replay value will come from just because the campaign isn’t anything astonishing. Modern Combat 4 makes out to be a great FPS, but at the same time it feels like it’s taking two steps forward and one step back.