It’s almost time for the big September 9th Apple media event, and that means it’s also time for MacTrast to predict what we think we’ll see unveiled at the big event! In addition to my thoughts and prognostications, I’ll also be the offering up the predictions and opinions of my two co-conspirators on the Macnificent podcast, Ian Fuchs, and Glenn Künzler.

Hell, this is a dead-solid lock. Of course we’ll see new iPhones, but what new features will we see, will there be any surprises? Will an iPhone be available in Mulva Pink?

Externally, excepting for the possibility of a pink, or rose gold color being added to the mix, this generation of iPhones will look much like last year’s model. It’s an “S” upgrade year, so that is to be expected.

Internally, we’ll see all sort of new features, including an improved A9 processor, hopefully with 2GB of RAM, and storage capabilities will stand pat at 16GB (really Apple! REALLY?!?!?), 64GB, and 128GB.

Force Touch is expected to make the leap from the Apple Watch, bringing “3D Touch” capabilities to the device. How that will all work is something we can’t wait to see.

We’ll see a new 12-megapixel back-facing camera, and even an improved front-facing 5MP iSight camera. Some rumors indicate the front shooter might gain a flash, and even possibly slo-mo capabilities. There are rumors of 4K video capabilities for the back shooter, but we’ll have to wait and see on that one.

Ian has a 4K related theory concerning tomorrow, although his prediction is more codec related:

“With rumors of Apple bringing 4K video capabilities to the iPhone 6S and 6S Plus, I believe they will likely introduce a new compression or video codec that makes the files much more storage friendly – but also could be used for delivering 4K content to the Apple TV in the future, in a much more streaming-friendly manner.”

While many observers expect to see Apple debut a new 12.9-inch “iPad Pro” at tomorrow’s event, it’s still up in the air whether or not it will actually make an appearance.

Reports indicate that if the iPad Pro does make a showing, it will boast a huge Retina display, four stereo speakers, offer an optional new stylus and iPad Pro-centric Keyboard, and will run iOS 9.1, which will be released before the iPad Pro actually hits shelves sometime around November.

The iPad Pro is also reportedly be able to run two iOS apps side-by-side full-sized in portrait mode, as opposed to how it works on the iPad Air 2 below, where it shrinks the apps for its side-by-side display. 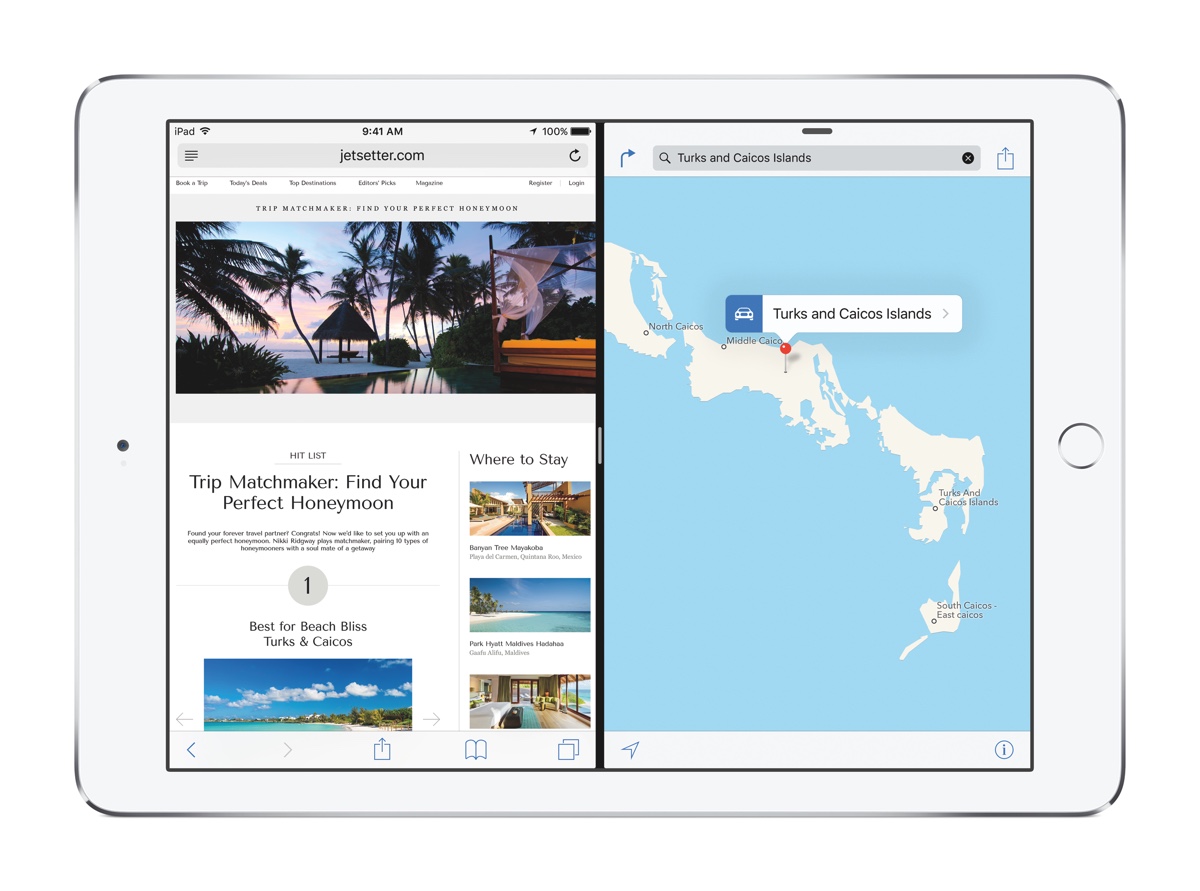 Also expected by some is an iPad mini 4, with improved specs. If the Pro makes an appearance, the mini will likely debut alongside it. If not, it’ll be unveiled at an October event.

The iPad mini 4 is expected to sport a slimmer profile, resembling the iPad Air 2, and is expected to boast an improved processor, as well as improved back- and front-facing cameras.

To me, it seems iffy that Apple will debut any new iPads at tomorrow’s event, as they usually hold an October shindig to do that. They’ll possibly tease the new tablets, and do the official launch in October. We’ll know for sure by tomorrow afternoon.

Here’s a debut that is at least two years overdue, and I for one can’t wait to see what Apple has in store for my favorite set top box.

The new Apple TV is expected to be larger than the current-generation model, and will boast an improved processor, more internal storage, a new iOS 9-inspired interface, its own App Store, possibly 4K video capabilities, and a touch-based remote control with built-in gaming features.

Also expected is Siri integration, with Universal Search. You’ll be able to search for something like “Agents of SHIELD” and you’ll see search results from almost all of the content providers available on your Apple TV. No more having to enter the app to search for content.

Here’s hoping Apple goes for the gusto when improving the Apple TV’s processor. Let’s not screw around with an enhanced A8X. Let’s go for an A9, or an A9X!  Hell, let’s go for an A10! Overclock that puppy! There’s no need to worry about battery consumption with an AC-powered Apple TV. No heat worries either. The Apple TV will be plenty large enough to allow for proper cooling. That’s just my two cents.

Mr. Fuchs would like to see Apple perhaps take a cue from Steam’s Steam Machine and Steam Link for the new box’s gaming features:

“For Apple TV gaming, Apple may offload some of the processing work to the Mac, similar to the way Steam is utilizing the PC to power games on the Steam Machine and Steam Link. This would enable higher quality games, without the need for extra processing power or storage within the Apple TV box.”

I would love to see a gaming controller like the one shown in the photo above.

“At the forefront will be the all-new Apple TV, built with content and platform integration in mind. Apple will also pioneer a new platform for living room entertainment, starting with a rich gaming partnership on the Apple TV to rival the gaming powerhouses of our day – namely Sony and Microsoft. It will also be 4K capable with a future software update, and will launch alongside an innovative new controller.”

To rival Sony and Microsoft? WOW! Maybe Nintendo to be sure, but… (Mr. Fuchs mentioned on this week’s edition of Macnificent that he would like to see an Apple/Nintendo partnership for the Apple TV. From his mouth to Cupertino’s ears.)

Apple will likely debut the final version of iOS 9 at Wednesday’s event, with the new mobile operating system either being available immediately after the event, or later this week.

Will there be any OS X or Mac happenings at the event? Some believe Apple may debut a 21.5-inch iMac with a 4K display. If they do that, we’ll possibly also see the release of OS X 10.11 El Capitan at the shindig. We won’t hold our breath for that one.

Before closing, we want to share one last prediction, this one from Glenn:

“Finally, Apple will call back to the Mac, announcing a new Retina Revolution across all devices, starting with the 21.5-inch iMac available in 4K, full 4K support on iPhone and iPad, and a path forward to bring their entire portable Mac lineup into the Retina standard.”

Wait! What About Siri?

Siri obviously figures to be a big part of Wednesday’s event, but what will we see? Is Apple just teasing us, just to get us to ask our iPhones, “Hey Sir, give us a hint.”

As well as seeing Siri integration in the new Apple TV, we’ll also see improved Siri capabilities in iOS 9. What the hell, let’s says there will be some BIG surprises coming for Siri on Wednesday, maybe Mac integration, “always on” Siri for iOS, or…