Apple CEO Tim Cook sat down for an exclusive interview with CNBC’s Jim Cramer on Monday, and called Wall Street’s response to the company’s Q2 2016 earnings report a “huge overreaction.” 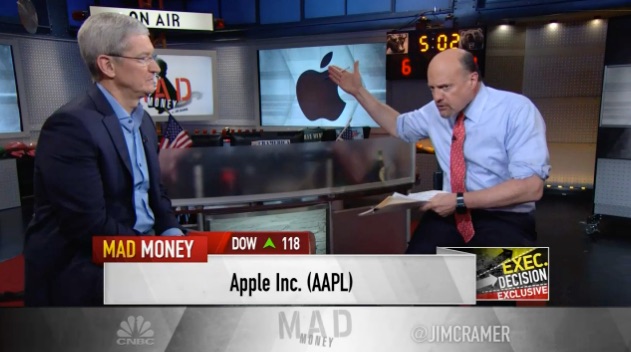 Cook noted the drop in iPhone numbers was due in large part to low upgrade rates, and macroeconomic headwinds, which affected growth market such as China. Cook said despite the decline, the device is performing well with those who have moved to the iOS platform over from other platforms, such as Android.

Cook stressed that despite the down numbers, China posted a “huge quarter” by absolute standards, and that in constant currency, Apple’s greater China business has grown over 70% during the past two years.

Without going into details, Cook teased “great innovation in the pipeline,” with new iPhones that will spur users to upgrade.

We’ve got great innovation in the pipeline. New iPhones that will incentivize you and other people that have iPhones today to upgrade to new iPhones.

We are going to give you things you can’t live without that you just don’t know you need today. That has always been the objective of Apple. To do things that really enrich people’s lives. That you look back on and you wonder how did I live without this.

Cook was typically closed-mouthed about the Apple Watch’s future features, not offering any hints about what’s coming, but believes today’s Apple Watch will be looked upon differently in the future:

If you look at iPod, iPod wasn’t viewed as a success, but today it’s viewed as an overnight success.

And so I think that in a few years we will look back and people will say, “How could I have ever thought about not wearing this watch?” Because it’s doing so much for you. And then it will all of a sudden be an overnight success.

Cook also brought up Apple’s business prospects in India. He discussed how this year’s regional rollout of LTE service could payoff big for the iPhone. Indian customers have traditionally went for budget devices, such as low-priced Android phones. But Cook believes the LTE rollout will give consumers, particularly those 25 and under, a compelling reason to upgrade to an iPhone.

Cook also discussed mature markets, like the U.S. and Europe, as well as Apple’s growing services sector, which is growing, thanks to Apple Pay and Apple Music.

The entire interview can be viewed above, in two parts.