Bloomberg reports Apple is overhauling their year-old Apple Music streaming service and related app, set for a debut at their Worldwide Developers Conference (WWDC) in June. Apple is working to make the service easier to use. 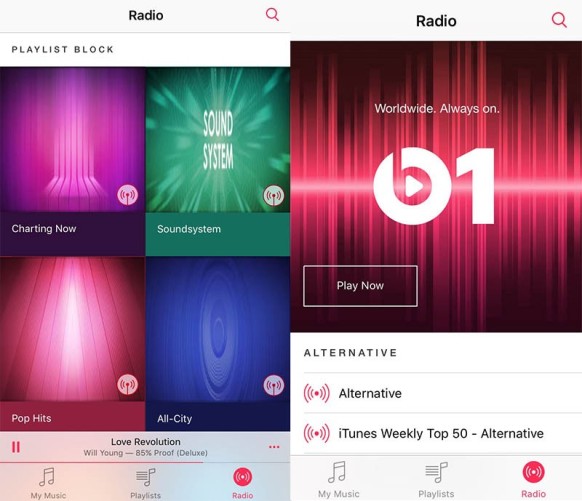 Bloomberg’s “people familiar with the product,” tell them Apple is working to provide better integration between Apple Music and iTunes, and is also planning an expansion of its Beats 1 radio service.

The changes will be accompanied by a marketing blitz to lure more customers to the $10-per-month streaming service. An Apple spokesman declined to comment.

Apple CEO Tim Cook is said to be banking on services like Apple Music to fuel growth, in the face of falling iPhone, iPad, and Mac sales. A number of analysts say Apple faces a big threat  to its overall wellbeing simply from its inability to develop strong Internet-based tools to go along with its popular, and beautifully designed devices. Apple’s services, such as Siri, Maps, iCloud, and Photos, have all faced criticism from analysts and users for being inferior to competitor’s offerings.

“When it comes to software, Apple performs with less elegance than it does when it comes to hardware,” said Colin Gillis, a New York-based BGC Partners analyst. “Apple Music is underwhelming. They have subscribers because of their platform. If you have that kind of subscriber base, you should have millions of subscribers.”

Apple’s Beats 1 streaming radio station was a major piece of the Apple Music rollout last year. The report indicates Apple is looking to build on that success by rolling out more Beats-branded stations. (Trademark filings by Apple last year indicate the company is working on developing more streaming stations, trademarking “Beats 2” all the way up to “Beats 5.”)

Apple services business benefited from the debut of Apple Music, seeing a 60% increase in revenue in 2015. The strong services performance has helped a little in offsetting falling revenues from the hardware side of things.

Apple’s Worldwide Developers Conference begins June 13. In addition to the revamped Apple Music service, Apple should also debut new versions of iOS, OS X, tvOS, and watchOS at the shindig, along with possible hardware announcements, such as refreshed Macs and possibly a preview of the new “Apple Watch 2.” We’ll be covering all the WWDC 2016 action, so be here then.