Siri co-founders Dag Kittlaus and Adam Cheyer on Monday offered the first public demonstration of “Viv,” their new virtual voice assistant that promises to offer a new level of interaction with electronic devices. 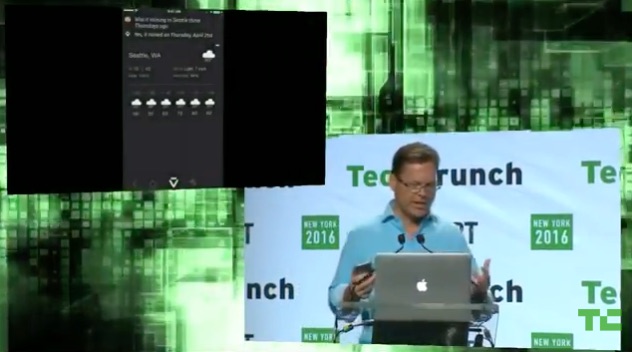 The demo took place yesterday at TechCrunch‘s Disrupt NY event, where Viv’s creators wasted no time showing what the new AI bot is capable of.

Kittlaus kicked off the demonstration by asking Viv what the weather was like, but then continued to query the assistant with increasingly complicated questions such as: “Was it raining in Seattle three Thursdays ago?” and, “Will it be warmer than 70-degrees near the Golden Gate Bridge after 5pm the day after tomorrow?” Viv answered the collected queries flawlessly.

Kittlaus says Viv’s enhanced contextual awareness is due to what he calls “dynamic program generation,” which enables the assistant to understand the users intent, and code its own responses on the fly.

Developers will be able to take advantage of Viv’s open-ended nature when integrating it into their own third-party apps. The hope is the nature of the platform will lead to new and complex app experiences, as developers will not need to hard-code specific responses in their interactive apps.

Kittlaus has previously noted Viv was closer to what the duo had in mind when creating Siri, but that original virtual assistant underwent a number of changes after its acquisition by Apple.

“Steve [Jobs] had some ideas about the first version, and it wasn’t necessarily aligned with all the things that we were doing,” Kittlaus told The Washington Post

Although Google and Facebook have already made offers to purchase the technology, Kittlaus and Cheyer haven’t announced plans to sell the technology to anyone. The company’s aim is to get the assistant into as many devices as possible. Kittlaus says the company will “pick the path that gets us there.” The first integrations are expected to begin appearing later this year.