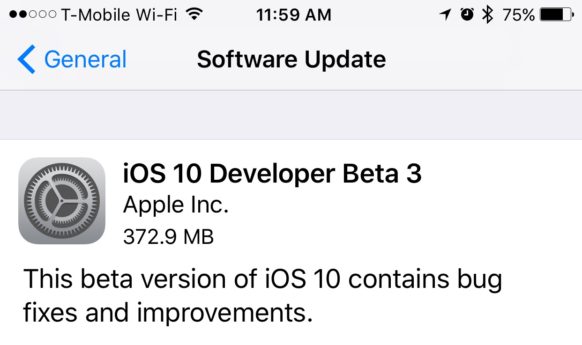 Today’s new version is available as an over-the-air update to users who either have the first beta or the beta configuration profile installed on their devices. The update will also soon be available via the Apple Development Center.

iOS 10 offers a number of new features and interface tweaks, including a new Lock Screen that includes 3D Touch-enabled notifications, a redesigned Control Center, and a new Widgets Screen. The Lock Screen also offers easier access to the Camera.

Other improvements include improved Messages, featuring handwritten notes, background animations, effects, new emoji, and an App Store for iMessage which will offer new stickers, animations and more for use in the Messages app.

iOS 10 beta three is currently only available to developers for testing, but public beta users should see an identical seed within the next few days. An official public release is due in the fall, alongside the debut of the new iPhones.