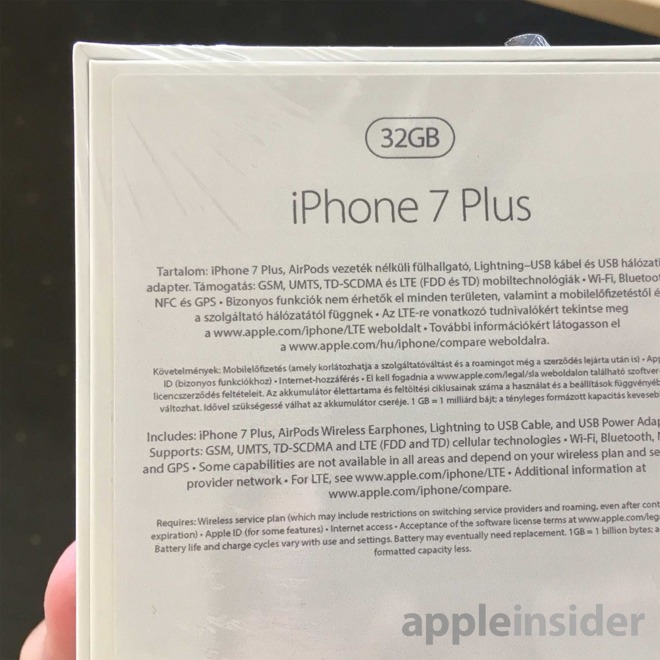 As usual, we warn readers to take the photo above with a grain of their favorite salt-free seasoning, as photos such as this are easily faked. We won’t know anything for sure until next week, when Apple unveils the new iPhones at their September 7th press shindig.

AppleInsider received the photo from an anonymous source on Thursday. The pic shows what is alleged to be the packaging for a 32GB iPhone 7 Plus, and shows “AirPods Wireless Headphones” as part of what’s included in the box.

Notable differences in this photo, when compared to earlier “leaked” photos that have been published, are no mention of “EarPods with Lightning Connector,” or a Lightning to Headphone Jack Adapter. Which kind of makes sense, if Apple is indeed including Bluetooth earbuds in the box with the handset.

Apple has long been rumored to be readying a radically new version of wireless earbuds that are completely separate from each other, with no connecting wire between the left and right earpieces, as is usual with most Bluetooth earbuds. Most reports indicate they will be known as “AirPods,” due to a recently uncovered regulatory filing by the Cupertino firm.

In six days, we’ll know for sure what Apple actually has ready in the release queue, as they have announced a September 7th media event, where they are expected to unveil the “iPhone 7,” and “iPhone 7 Plus” handsets. Also expected to debut at the event is the “Apple Watch 2.” While Apple is expected to unveil new Macs this fall, they likely won’t make an appearance at next week’s shindig. MacTrast will be liveblogging the event, as well as providing a closer look at the new products unveiled during the event, so be here on Wednesday!