The American Customer Satisfaction Index (ASCI) on Tuesday released the results (PDF) of its latest U.S. personal computer consumer satisfaction survey. The survey, which includes satisfaction with tablets, shows Apple squeaking by Samsung by a single point to top the survey for the thirteenth year in a row. 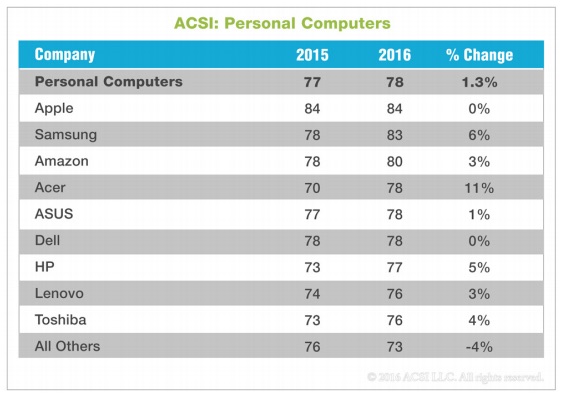 Apple maintained its year-ago score of 84 out of 100 in the survey, consisting of interviews with 3,500 customers chosen at random and contacted via email in June to share their experiences with recently purchased products like Macs and iPads.

Samsung, in just its second year of tracking by ACSI, trailed by one slim point behind Apple with an 83 score, which is a nice 6.4% bump over its 2015 score. Amazon, who makes the low-priced Kindle tablet lineup, finished third in customer satisfaction, with 80/100. PC makers Acer, ASUS, Dell, HP, Lenovo, and Toshiba rounded off the list with scores of 73 – 78.