We’ve seen benchmark scores that show the new A10 Fusion chip in the iPhone 7 and iPhone 7 Plus is fast. We mean, desktop system fast. Faster than a MacBook Air fast. But how does it fare when running popular apps head-to-head against Samsung’s latest and greatest, the Samsung Galaxy Note 7? 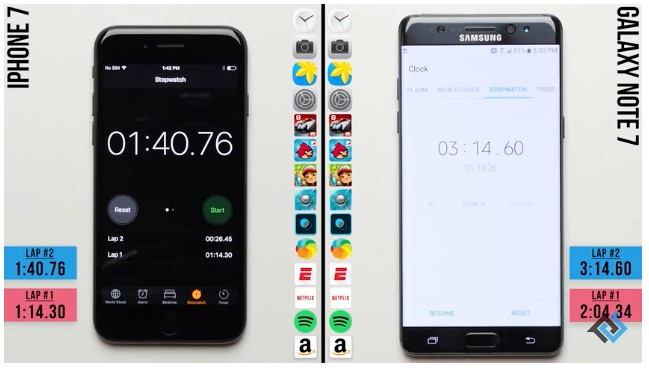 PhoneBuff pitted Apple’s new flagship handset against the Samsung Galaxy Note 7 by opening a group of popular apps on both devices, including games and entertainment apps, and then having the devices create a timelapse video from an identical source video, using “Lapse It.”

Once all the apps were open, PhoneBuff then tested the efficiency of the phones by re-opening all the same apps. All in all, it struck me as a very realistic test of the practical performance of the two smartphones.

The result? Not only was the iPhone 7 dramatically faster than Samsung’s flagship, it actually ‘lapped’ the Note 7 by completing its second loop before the Galaxy had finished the first one.

As a side note, the video didn’t show the Samsung bursting into flames, and PhoneBuff also didn’t report a “hissing” sound coming from the iPhone 7 as some users have when the device is put under a heavy operational load. So the devices have that going for them. Which is nice.

How has your iPhone 7 been operating in the short time you’ve had it? Is it noticeably faster than your previous iPhone, (or other mobile device), in day-to-day usage? Please share your thoughts in the comments section, below.