If you’ve always wanted a piece of Apple history that would hang nicely on the wall, consider this one. The first Apple stock certificate awarded to company co-founder Steve Jobs is up for sale. Bring your American Express black card though, because it will cost you a cool $195,000 USD for the privilege of hanging it on your wall. (No word on whether or not the price includes the frame.) 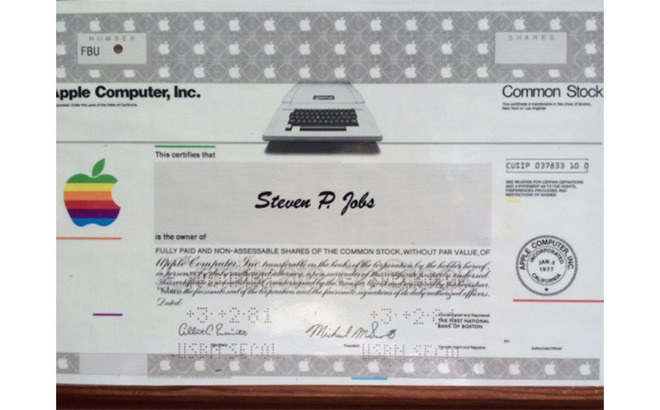 On sale now at Moments in Time, the certificate appears to have been issued to Jobs shortly after Apple went public in 1980, as evidenced by a 1981 date perforated into the document, reports Silicon Beat.

Moments in Time’s Gary Zimet says the certificate hung on the wall of Jobs’ office until 1985. That’s when Jobs was famously forced out of Apple in a power play brought on by then CEO John Sculley, the very man Jobs handpicked to help run Apple.

Understandably, Jobs left in a huff, not bothering to take much of what he had in his office with him as he walked out the door. Shortly after Jobs left the company, Sculley ordered workers to clear out Jobs’ office. The certificate that is currently up for sale wound up in a dumpster with all of the other stuff from the office. However, an alert Apple employee retrieved the stock certificate, keeping it for 31 long years.

Jobs triumphantly returned to Apple via the company’s acquisition of Jobs’ NeXT company. He returned to his leadership position at the Cupertino firm, where he helped return the nearly-failed company to greatness, via the iMac, Intel-powered Macs, the iPhone, and iPad.

The unnamed employee who has put the stock certificate up for sale has provided a notarized letter of authenticity to go with the document. As for other proof as to the document’s legitimacy, Zimet points to the date in perforated holes on the certificate and the company seal.

Documents signed by Jobs are rare, and bring a pretty penny on the open market. in 2011 a collection of documents, which included an original founding document signed by Jobs, and co-founders Steve Wozniak and Ronald Wayne went for $1.6 million.

“I’m looking to buy any and all important content signed by Jobs,”said Zimet, who has no qualms whatsoever about selling something that was once Jobs’ personal property.

“The CEO ordered the office cleaned out,” Zimet said. “So finders keepers.”