Apple today seeded the second betas of watchOS 3.1.3 and tvOS 10.1.1 to developers for testing. The new betas come a number of weeks after the first beta release of both upcoming operating systems. 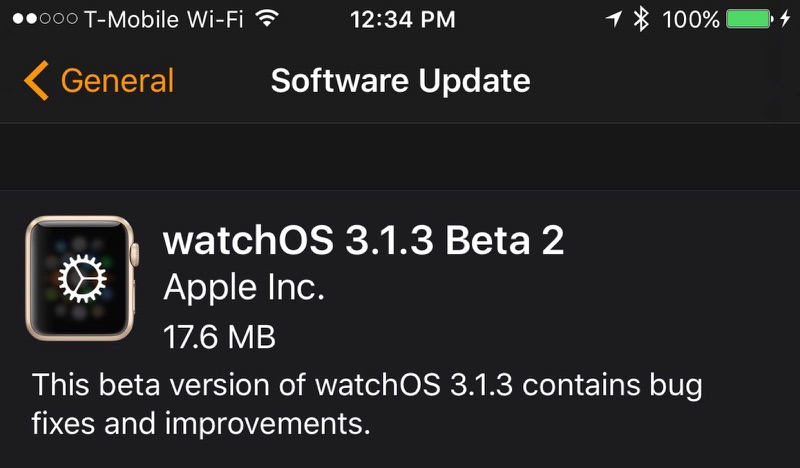 The first beta of watchOS 3.1.3 – Build 14S959 – can be downloaded through the dedicated Watch app on an iPhone running iOS 10 or higher by going to “General” -> “Software Update.” The Apple Watch must have 50% battery life remaining, be placed on an Apple Watch charger, and it must be in range of the iPhone.

As a minor 3.1.x update, the beta is likely to be made up of under-the-hood bug fixes and performance improvements, with no outward-facing new features discovered in the first four betas. We’ll keep our eyes peeled for any new features in the beta, and will report them in this space.

The second beta seed of tvOS 10.1.1 – build 14U711 – is now available to developers, either from the Apple Developer Center or as an over-the-air update on Apple TV devices that have the proper beta profile installed.

tvOS betas are a bit more involved to install than beta updates for iOS and OS X. Users must connect the Apple TV to a computer with a USB-C to USB-A cable, and install the update via iTunes or Apple Configurator. However, once a beta profile has been installed on the device, new beta releases are available over-the-air.

At this point, we don’t know what changes or enhancements the new beta holds in store. As a 10.1.x update, the changes are likely to be limited to bug fixes and performance enhancement. If we hear different, we’ll update you in this space.