Apple says it is looking into a video showing a partially melted, smoking iPhone 7 Plus. The incident appears to have been caused by a battery malfunction. 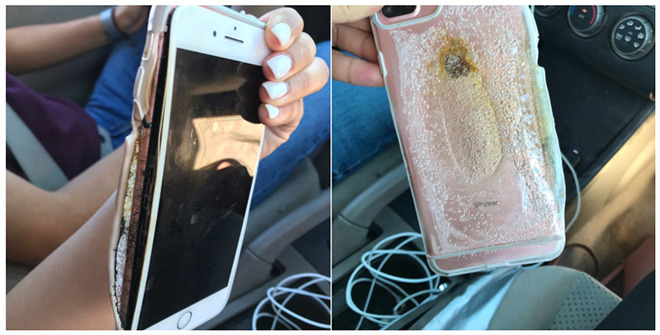 On Wednesday, Brianna Olivas posted to Twitter a video of smoke billowing from a large crack in her rose gold iPhone 7 Plus. Seen below, the footage reveals a large section of the iPhone’s display pulling away from its aluminum chassis anchoring, then delaminating from its coverglass only seconds later.

So my IPhone 7 plus blew up this morning ? was not even using it, literally no explanation for this pic.twitter.com/sQ8CJt4Y69

As of this post, the video has received almost 2 million views and has been retweeted over 25,000 times.

Olivas told Mashable that she had trouble powering up her device, which she had purchased in January from a Sprint store. While she took the device to an Apple store for testing, employees there found the device to be working normally.

“The next morning I was asleep with my phone charging next to my head, my boyfriend grabbed the phone and put it on the dresser,” she said via a direct message on Twitter. “He went the the [sic] restroom … and from the corner of his eye he saw my phone steaming and [heard] a squealing noise. By the time he got over to the phone it had already caught fire, he quickly grabbed the phone and threw it in the restroom … as soon as he threw it in the restroom is [sic] blew up and more smoke started coming out of the phone.”

At this time it is unknown exactly what caused the iPhone 7 Plus to begin smoking and eventually experience its own China Syndrome-type meltdown. AppleInsider notes that a number of clues indicate a battery pack failure.

… the wispy white smoke is indicative of a catastrophic battery pack failure in which vaporized electrolyte material is emitted. The event, sometimes caused by a thermal runaway, is often characterized by the cascading disintegration of neighboring cells.

Beyond what appears to be a bulging effect where the iPhone 7 Plus battery pack lives, the presence of chemical stains seen on the damaged device’s exterior further support the theory of a battery failure.

Olivia has since handed the device over to Apple, where representatives have told her they are conducting tests and expect to know more within a week. Meanwhile, an Apple spokesperson says the company is aware of the video, saying only, “We are in touch with the customer and looking into it.”

The video is sure to bring to mind last year’s Samsung Galaxy Note 7 fiasco, where the Korean electronics company was forced to recall all units of the handset after multiple users complained of their device catching fire. However, the iPhone 7 Plus incident appears to be an isolated incident. We will keep our eyes open for any reports of other cases of this type.

We will keep you posted as this story develops.