Apple CEO Tim Cook was on hand Thursday at a Silicon Valley screening of Apple board member Al Gore’s new film, “An Inconvenient Sequel: Truth to Power.” Cook introduced the film and its creators to the audience. 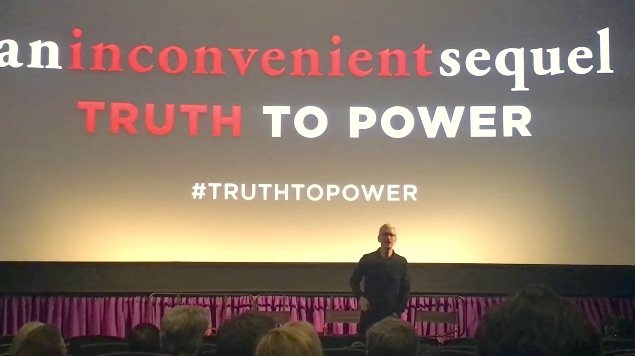 “But there’s also great reasons for optimism, and there’s renewable energies that have been developed over that period of time and are being widely deployed. Almost every country in the world has agreed to do certain things, and markets are rewarding renewable energy everywhere,” Cook said. “But the clock still runs, and the urgency has never been greater. And so I think there’s never been a better time for this film.”

Apple has invested in a number of renewable energy projects around the globe, including solar, wind, and energy projects, and more. The company has also purchased thousands of acres of U.S. and Chinese forestland, which sees some of its output going toward eco-friendly product packaging.

In a video of the event posted to YouTube by venture capitalist Steve Jurvetson, Al Gore discusses Apple’s contributions to green initiatives. (Via AppleInsider)

“It is important to note that Apple is 100 percent renewable energy in the U.S., 93 percent worldwide, closing in on 100 percent worldwide,” Gore said. “Taking out the toxics; more recycling; more environmental standards than any company in the world. And, the most profitable country (sic) in the history of the world. So, these two things can and often do go together.”

“An Inconvenient Sequel: Truth to Power” picks up where Gore left off in 2006, and follows him as he gives talks about climate change, talks with those in the eco-movement, and argues climate change with various political pundits. The film is set for general release on July 28.