Apple on Wednesday announced it will announce its quarterly earnings for the fiscal third quarter of 2017 on August 1. The third quarter is traditionally the Cupertino firm’s slowest sales period of the year. 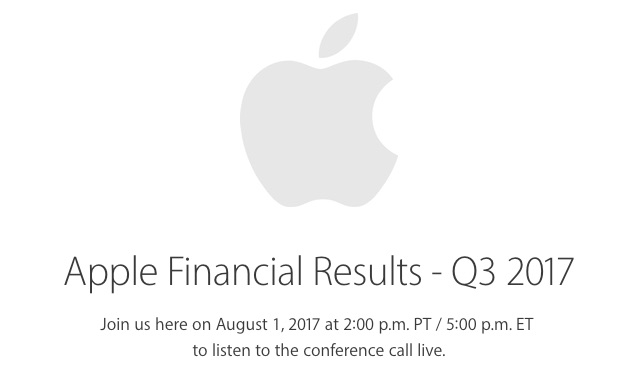 The earnings report will be released on the afternoon of Tuesday, August 1, at 1:30 p.m. Pacific/4:30 p.m. Eastern, followed by an earnings conference call at 2 p.m. Pacific/5 p.m. Eastern time. Apple CEO Time Cook and CFO Luca Maestri are expected to offer an analysis of the company’s earnings during the quarter, and usually field questions from analysts.

Apple is providing the following guidance for its fiscal 2017 third quarter:

MacTrast will provide coverage of the report.